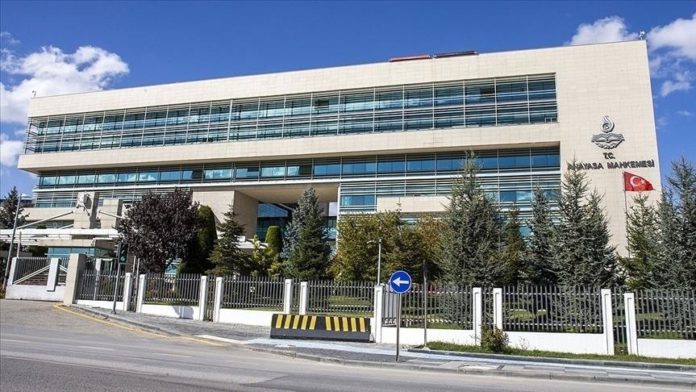 The head of Turkey’s Constitutional Court on Friday appointed a rapporteur on a lawsuit filed by the Supreme Court of Appeals’ chief prosecutor for the closure of the Peoples’ Democratic Party (HDP).

According to information received by Anadolu Agency, the examining process of the indictment has started and a rapporteur was appointed.

The rapporteur must complete his report on the first examination and present it to the Constitutional Court.

If accepted, the indictment will be sent to the HDP for pre-defense. The HDP has to plea within the time allowed by the Supreme Court.

The party, however, will be able to apply for an extension of this period. The additional time request will be decided by the Constitutional Court.

After the preliminary defense is given by the party, the Supreme Court Chief Public Prosecutor Bekir Sahin will present his opinion on the merits.

Following this process, the reporter will collect information and documents on the case and prepare a report on the merits.

The delegation of the Constitutional Court, comprising15 members, will decide on the closure case of the HDP.

One of the potential outcomes of the lawsuit is the closure of the HDP.

Instead of a permanent dissolution, the 15-member Constitutional Court may decide to partially or completely cut off state aid to the party, depending on the severity of the acts in question.

Sahin filed the indictment — seeking dissolution of the HDP — at the Constitutional Court on Wednesday and the details of it were released on Thursday.

The 609-page indictment said the permanent closure of the HDP was a legal obligation for the indivisible integrity of the Turkish state, and peace and security of the nation. It said the party should also be fully deprived of the treasury grants.

The HDP is linked with the PKK terror group like the parties closed earlier by the Constitutional Court and that it is the terrorists’ offshoot in legal disguise, as proved by the evidence put forth in indictments at various courts and court verdicts against the HDP members, as well as various terror activities — such as Oct. 6-8 events and activities of digging trenches — in previous years, it said.