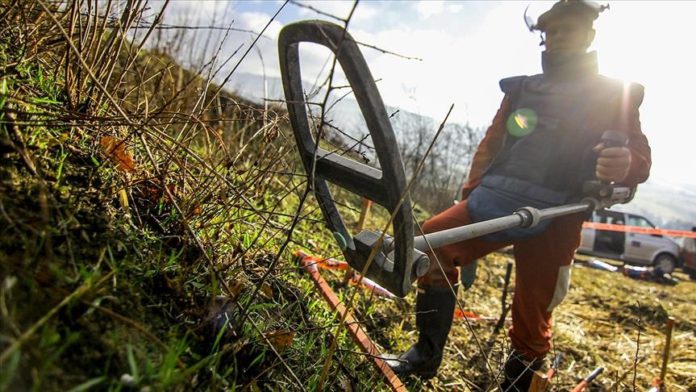 Since it was founded in 2015, the Turkish Mine Action Center (TURMAC) has served as a model institution for raising awareness of the threats posed by mines while helping the goal of de-mining both Turkey and the world.

Turkey first banned the use of APMs in 1996, and then in 2004 became one of the signatory states to the Ottawa Treaty, formally known as the Convention on the Prohibition of the Use, Stockpiling, Production and Transfer of Anti-Personnel Mines and on Their Destruction.

Under the treaty’s requirements, the Turkish Armed Forces established special mine detection and sweeping teams working in the country’s eastern, southern, and southeastern border regions to detonate thousands of APMs. By 2011, it had destroyed a stockpile of some 3 million anti-personnel mines.

To give new impetus to the complete de-mining of Turkish soil, in 2015 TURMAC was formed under the National Defense Ministry.

For its first extensive undertaking, in 2016-2019 an area of over 4.8 square kilometers (1.85 square miles) was de-mined and more than 59,000 APMs were discharged in the eastern Igdir and Agri provinces.

Under the operational control and coordination of TURMAC, mine clearance teams from various branches of the Turkish Armed Forces and gendarmerie also cleared around 1.5 square kilometers (0.58 square miles) and discharged around 21,000 APMs.

TURMAC’s de-mining projects thus prevented the possible loss of life and opened up territories for use by the country’s agricultural and livestock sectors.

The mine clearance also helps revive nature in vast areas of the country.

Raising awareness of the lethal threats caused by mines is among the primary intentions of the center. To this end, it has already started organizing mine-risk education at schools in Turkey’s border provinces, where de-mining operations are still underway.

TURMAC’s successful role has been praised by the UN Development Program (UNDP) and the European Union, who cooperate with it in Turkey’s clearance of mined territories. The two institutions are among the prominent sponsors of TURMAC’s mine clearance operations, concentrating mainly in Turkey’s border provinces.

Cambodia, one of the most heavily mined countries globally, also approached TURMAC to get the benefit of its knowledge, experience and technical expertise. As a result, in October 2018, a memorandum of understanding was signed between TURMAC and the Cambodian Mine Action and Victim Assistance Authority (CMAA).

Thanks to its growing technical capabilities and expertise, the center aims to reach its goal of a mine-free Turkey by the end of 2025. Educating more people on mine-related risks remains a fundamental goal of the center.

Tryst with Africa in Ankara