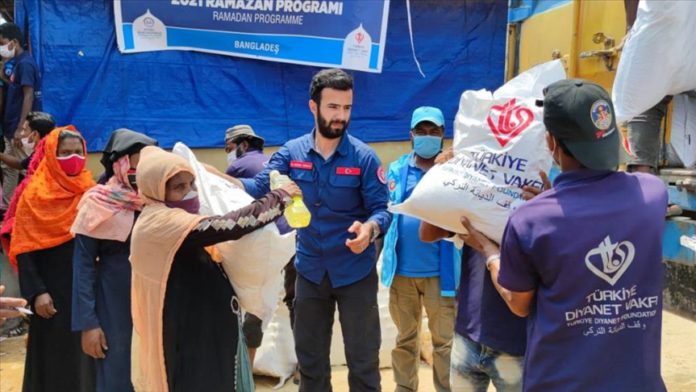 A Turkish charity on Monday distributed 15,000 food packets to Rohingya refugees and their hosts in Bangladesh for the Muslim holy month of Ramadan set to begin this week, said officials of the group, which is tied to Turkey’s Religious Affairs Directorate or Diyanet.

“For the 2021 Ramadan program we distributed 11,800 food packets for the Rohingya community. But we didn’t forget the host community. We distributed 3,200 food packages for our Bangladeshi brothers and sisters,” Oguzhan Adsiz, the Bangladesh coordinator for Turkey’s Diyanet Foundation (TDF), told Anadolu Agency on Monday night.

The packets are benefiting 80,000 persecuted Rohingya along with thousands of locals, as on an average there are seven members per Rohingya family in Bangladesh’s camps, according to official data.

Referring to the group’s special packages for various occasions including the holy Eid-al-Adha, Ramadan, and winter, Adsiz added: “The Turkiye Diyanet Foundation has been working since 2012 in Bangladesh. From the start of the Rohingya crisis in August 2017 till now we have done many projects for the Rohingya community.”

For the holy month of Ramadan, he said they have another project to donate 5,000 copies of the holy Quran among the host community.

The group is also producing Eid clothing for Rohingya at its sewing centers where young Rohingya women work.

Earlier, the group produced 45,000 bottles of liquid soap in its camp-based factory and distributed those among the persecuted people to ensure safety during the pandemic, Adsiz said.

Some one million Rohingya took refuge in neighboring Bangladesh amid persecution in Myanmar.