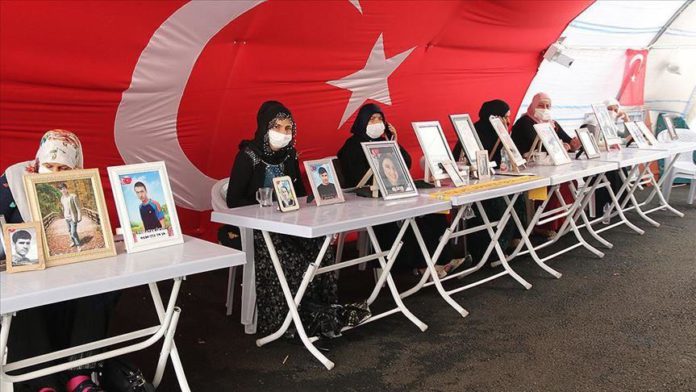 A group of aggrieved families in southeastern Turkey continued a sit-in protest during Eid al-Adha against the YPG/PKK terror group outside the office of a political party.

The protest — now in its 335th day — began on Sept. 3 last year in the city of Diyarbakir, when Fevziye Cetinkaya, Remziye Akkoyun, and Aysegul Bicer said their children had been forcibly recruited by PKK terrorists.

The sit-in outside the office of the Peoples’ Democratic Party (HDP) — which the government accuses of having links to YPG/PKK — has been growing day by day with the participation of many others since then.

Protesters have vowed to remain at the sit-in until every family reunites with their child.

With a photograph of her abducted child in hand, one of the mothers, Kamile Kucukdag, voiced her determination to stay until she got her son back.

“We’ll continue our protests for 11 months regardless of summer, winter, illness or Eid [holidays]. We’ll celebrate Eid when we get our child back,” Kucukdag said, adding that she had now seen 12 eid, yearly Muslim festivals celebrated twice a year, without her son.

Most Muslim-majority countries around the world, including Turkey, are currently observing the four-day Eid al-Adha holiday.

Accusing the HDP and PKK of kidnapping Kurdish children, Bingol asserted that they used Kurdish people for their own propaganda and tortured them for 40 years since the terror group was founded.