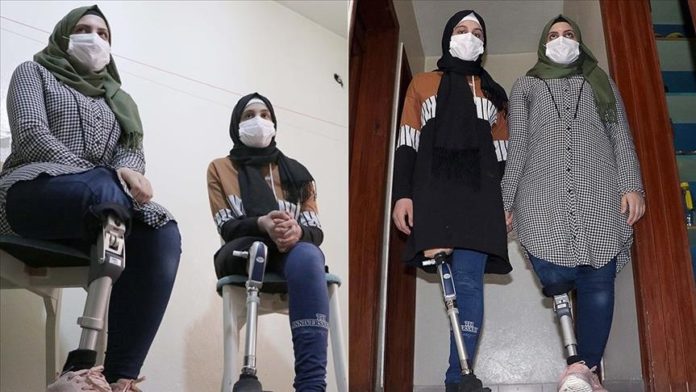 Seven years after the Assad regime jolted their world, two Syrian sisters are enjoying a new lease on life in Turkey.

Meryem Aliomer, 20, and her 14-year-old sibling Mecide lost their right legs in a Syrian regime strike on a bus stop in Aleppo in April 2014.

Their limbs were amputated from below the knee and the girls were forced to use crutches for basic mobility.

Meryem and Mecide saw hope for a normal life when they resettled in Gaziantep, southeastern Turkey, with their parents and other siblings.

Turkey’s Humanitarian Relief Foundation (IHH) came to their aid and started efforts to get them prostheses.

The sisters were taken to a center in the Reyhanli district of Hatay province and returned with their prosthetic legs after a month of medical care.

Thanks to the prostheses, Meryem and Mecide are able to comfortably meet their friends and look after themselves.

“They underwent tests at the facility and their treatment immediately started. The process will continue in the future as per the requirements of their physical growth,” said Yunus Mengilli, the IHH’s representative in Gaziantep.

“They will be able to go to school and do other tasks on their own. They can now enjoy their social lives,” he added.

Meryem said she was happy that the prosthetic leg allows her to do things on her own.

“Life without this prosthesis was challenging, and this treatment will help me cater to my own needs,” she said.

For Mecide, the most exciting part is that she can now get back to playing games and having a good time with her friends at school.

Amid mounting atrocities in the civil war raging in Syria since early 2011, Turkey opened its borders to Syrians fleeing from the Assad regime’s brutalities.

Turkey is hosting some four million Syrian refugees today, the most for any country in the world.