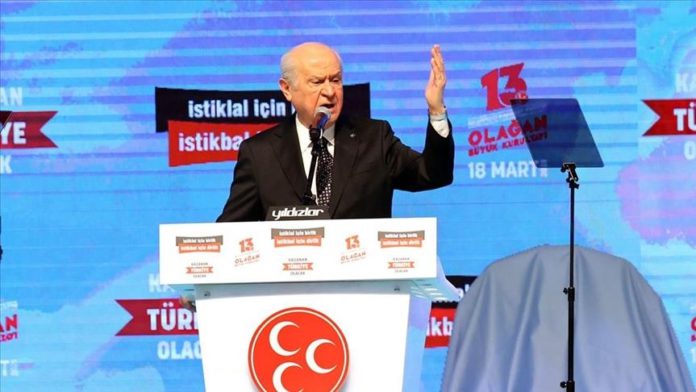 The leader of Turkey’s Nationalist Movement Party (MHP) on Thursday voiced support for efforts for the dissolution of the opposition Peoples’ Democratic Party (HDP).

“The HDP is a criminal organization in a political guise. Its closure, without it being allowed to reopen under another name, is a duty of honor to history, justice, our nation, and our coming generations,” Devlet Bahceli said at his party’s 13th Ordinary Grand Congress in the capital Ankara.

His remarks came a day after Turkey’s top prosecutor filed an indictment seeking dissolution of the HDP, calling it an undemocratic party that colludes with the PKK terrorist group and seeks to destroy the unity of the state.

Bahceli said the indictment filed by the top prosecutor was “the voice of law and justice.”

“This development has put the minds of our entire nation at rest,” he said.

“The HDP is the PKK; a murderer and a death trap for innocent children, youth, and women.”

The move follows growing calls by Turkish political leaders for the HDP to be officially closed down. In recent years, more and more HDP executives and elected officials have been charged with terrorism-related offenses.

Turkish leaders have long argued that the HDP is little more than a front for the terrorist PKK.

The MHP leader also brushed aside rumors of possible snap elections in Turkey.

“The elections will be held on time [in 2023]. Turkey will not deviate from this route,” Bahceli said.

He reaffirmed that President Recep Tayyip Erdogan will be their presidential candidate for the 2023 polls.

The MHP cooperates with the ruling Justice and Development (AK) Party under their People’s Alliance, formed ahead of the June 2018 general elections.

The AK Party has also consistently denied rumors of early elections in the country.