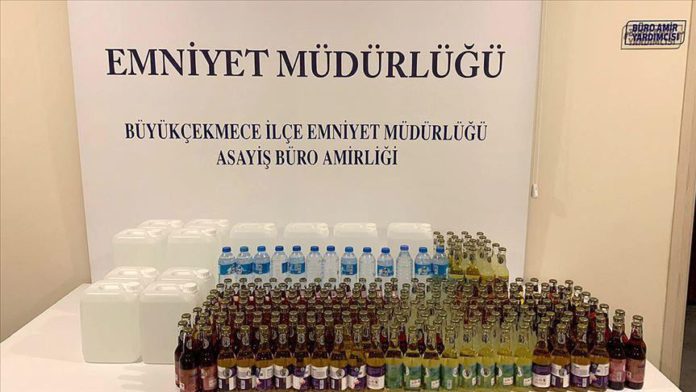 In an operation in Arsuz in the southern Hatay province, police seized 2,390 liters of bootleg alcohol. One suspect was detained.

Some 79 liters of alcohol were also seized in the Black Sea province of Giresun. Police teams detained two Georgian nationals in the operation.

In addition, acting on a tip, police in Istanbul’s Maltepe and Sancaktepe districts seized 41 bottles of bootleg alcohol and materials for its production.

In the operations, four suspects, including two Turkmen nationals, were detained by police teams.

Also, in Corlu in the western Tekirdag province, 586 liters of bootleg alcohol were seized in a raid on a house, and one suspect was arrested.

According to data compiled by Anadolu Agency, since Oct. 9 a total of 63 people in 10 provinces have died of methyl alcohol poisoning.

May 16, 2020
We use cookies to ensure that we give you the best experience on our website. If you continue to use this site we will assume that you are happy with it.Ok