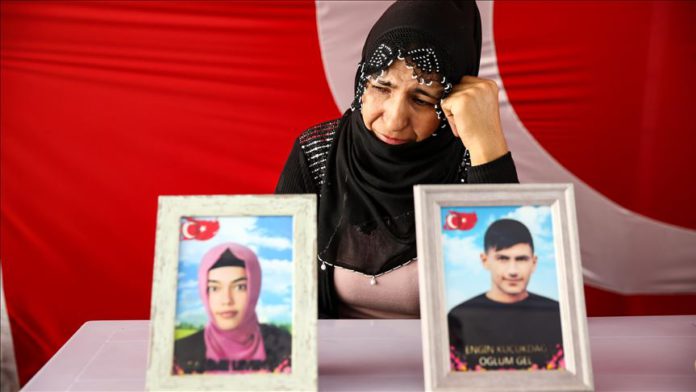 The PKK terror group that has shed blood for 36 years and kidnapped and recruited children, is being dissolved with the determination of mothers.

As a result of successful operations in Turkey and abroad, the PKK terror group is on the brink of collapse and has a hard time recruiting new soldiers.

In its foundation years, most soldiers in the PKK ranks were young adults, and in the 1980s, members raided villages and kidnapped young people between 15 and 16 years old.

At least one child kidnapped from families

The PKK forced at least one child from families who do not “pay taxes” in support of the group. To complete recruiting, the PKK continued raiding villages and kidnapped young adults from ages 15 to 20, with oppression and threats.

The terror group continues the same approach, according to statements by captured or surrendered members of the organization.

The terror organization cares a great deal about women and young people’s support, and there is no age restriction in the organization. Every person who can go out independently from their parents is considered an adult.

In order to lure young people, it emphasizes values such as heroism, sacrifice and tries to influence young people psychologically.

Having gone through a difficult time in finding recruits to work in the city and rural areas, the PKK tries to deceive and kidnap children who are vulnerable.

The terror group, and the YPG in Syria, under the cover of fighting with the Daesh/ISIS terror group, recruit children and use them in armed, bombed attacks.

PKK targets families who do not support group

The terror organization targets families who do not support and speak against the group.

It kidnaps children specifically from those families in order to scare and discourage residents in the region.

Through legal and illegal organizations belonging to the PKK, children are being lured with language courses, education programs, spring and summer activities and camps, which are a prequel to being deceived and kidnapped to the mountains.

In spite of calls from the international community, the PKK use children and commit war crimes and continues to violate human rights, according to statements by former terrorists who have surrendered to justice.

With the influence of mothers against the PKK, who have been sitting in protests for weeks to save their children from the terror group, terrorists have surrendered to justice that have lead to happy reunions with families.

A terrorist identified as H.K., joined the PKK from the eastern Diyarbakir province of Turkey at 17 years old.

He said his friends considered joining the PKK in March 2015 but he had no intention of joining. They joined through a civil society organization, which is now closed by a government decree.

“Under the influence of drugs, my friends persuaded me. We decided to join PKK together. We went to a civil society organization, and told them we want to join PKK. They took us to Sise province, we were met by members of PKK. We stayed the night, and I was sober the next day. They took our credentials and gave us code names.

“I told them I changed my mind, and they said if I can’t adjust in time, they’d send me back. Then we went to a PKK headquarters, more young people were there to join. They then sent us to a training camp in Mount Cudi countryside,” said H.K.

Another child who was kidnapped by two armed members of the PKK in eastern Dogubayazit province said he was seized and joined the terror group without consent.

A child who went to a festival, was kidnapped by PKK members and taken to a camp in Iraq. He fled three days later.

Another victim was invited to festivities organized by the PKK and was told he would be sent to the PKK. He was threatened if he did not comply, family members would be killed one by one.

One boy who surrendered to security sources said he would visit the headquarters of Peoples’ Democratic Party (HDP), which the Turkish government accuses of having links to the YPG/PKK. There, some members of the organization told him he would be rich if he joined the PKK. He was taken to the mountain by two gunmen.

Families started to speak against the PKK, which has been losing power with successful operations in recent years.

Hacire Akar claimed her son was kidnapped to the mountains Aug. 22, 2019 and started a sit-in protest in front of the Diyarbakir headquarters of the HDP.

After she was reunited with her child as a result of protests, other mothers began to get hope.

Families come from all provinces in Turkey to join with the pain of being separated from their children. Protests still continue after 11 months.

Fifteen families were reunited with their children thanks to the protests, while others wait through the summer and winter months longing to embrace their children.

Security forces conduct persuasion to save kidnapped and deceived children from the PKK.

They collaborate with families and in the last four years, 698 people have escaped from the PKK and surrendered.

In the last year alone, at least 125 terrorists have been persuaded to surrender. In total, 137 members of the terror organization surrendered.