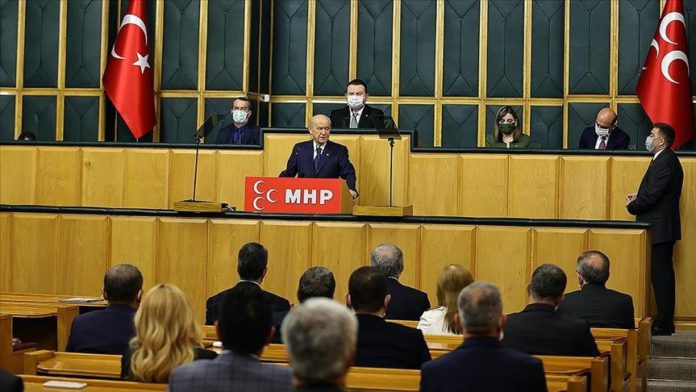 The leader of a major party in Turkey lambasted Italy’s premier for recent comments on the Turkish president.

“The ‘dictator’ accusation is not a challenge, but arrogant and vindictive slander. Those looking for a dictator should look into their own history,” he said.

She was then offered a seat on a couch, with Turkish Foreign Minister Cavusoglu also sitting down on a separate couch opposite her.

Speaking to reporters last Thursday, Cavusoglu downplayed the brief confusion over the seating arrangements, saying that Turkey had satisfied all the protocol requirements of the EU side.

Touching on rising tensions between Ukraine and Russia, MHP leader Bahceli stressed that any conflict between the two countries would put the security of Turkey and the Black Sea at risk.

“We sincerely hope that common sense will prevail between these two countries. Respect for Ukraine’s territorial and political integrity should be essential,” he said.

“The Black Sea, which is a sea of ​​peace and tranquility, will not be the scene of new and violent struggles for hegemony.”

The conflict in the eastern Ukraine between government forces and Russia-backed separatists has escalated in recent weeks. The Ukrainian Army said one Ukrainian soldier was killed Sunday night in cross-border firing.

Fighting between Ukrainian government forces and pro-Russian separatists in eastern Ukraine has seen more than 13,000 people killed, according to the UN.