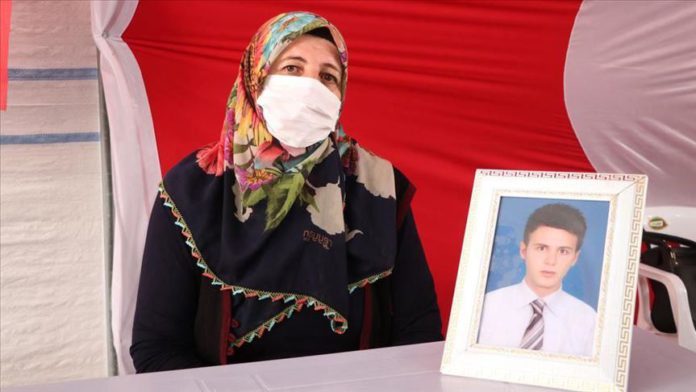 For 291 days straight, a group of families has been pleading for the return of their children recruited by the YPG/PKK terror group in the southeastern Diyarbakir province of Turkey.

The protest started on Sept. 3 outside the offices of the Peoples’ Democratic Party (HDP), a party accused by the government of having links to the YPG/PKK, in Diyarbakir when Fevziye Cetinkaya, Remziye Akkoyun and Aysegul Bicer said their children had been forcibly recruited by PKK terrorists.

The sit-in of families has been growing day by day with participation of many others since then.

Protesters have vowed to stay there until every family reunites with their child.

Solmaz Ovunc is among the mothers protesting who joined them from the eastern Van province hoping to reunite with her son Baran. He was abducted by the terrorists five years ago when he was just 15 years old.

“The HDP took my kid away from me and gave him to the PKK,” she said, stressing that she would wait not just 291 days but 92 years until her son comes back.

“Bring my child back wherever he is,” Ovunc called on the party and the terrorists.

She also urged her son to turn back and surrender to justice.

– ‘I chased after my kid, but they did not show him to me’

Abdullah Demir, who joined the sit-in for his son Fatih, said: “I chased after my kid, but they [PKK terrorists] did not show him to me.”

He said they kidnap small children between the ages of 12-16 who are not aware of the world.

“People here [staging the protest] live with longing for their kids,” Demir said.

Urging all mothers whose children were abducted to join the protest, Demir also appreciated a Turkish mother seeking for her daughter’s return by protests she has been staging for months by herself in Germany.

Maide T., from a Turkish immigrant family in Germany, said her daughter Nilufer had been forcibly recruited by the PKK terrorist group in Germany.

Nilufer T. has been missing since Nov. 12, after she said she was going to school.

In its more than 30-year terror campaign against Turkey, the PKK — listed as a terrorist organization by Turkey, the US, and EU — has been responsible for the deaths of 40,000 people, including women, children and infants. YPG is its offshoot in Syria.