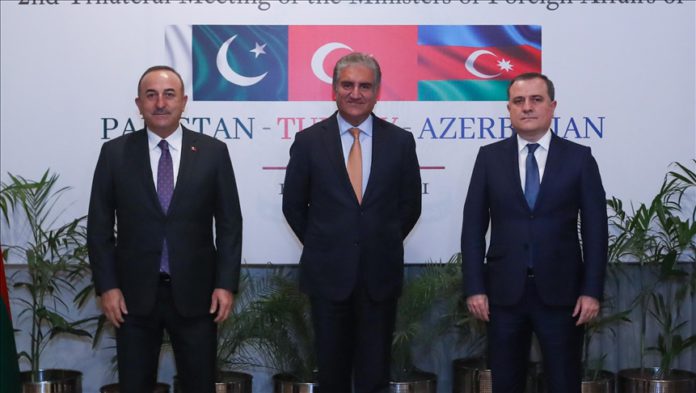 Turkey, Pakistan, and Azerbaijan have agreed to formulate a joint strategy to stem the rising wave of Islamophobia in the world, mainly in the West, and curb terrorism, including its state-sponsored form.

The agreement was reached at the Second Trilateral Meeting between the three countries, attended by Turkish Foreign Minister Mevlut Cavusoglu, and his Pakistani and Azerbaijani counterparts, Shah Mehmood Qureshi and Jeyhun Bayramov, according to a statement from the Foreign Ministry.

The three sides discussed a variety of issues, including trilateral cooperation in the areas of peace and security, trade and investment, science and technology, education, and cultural cooperation.

Expressing concern over “grave” human rights violations in the disputed Jammu and Kashmir, and rising Islamophobia, they agreed to launch joint efforts to defend the Islamic values.

The three foreign ministers, the statement said, also discussed the ongoing Afghan peace process, which aims to bring an end to a 19-year conflict in the war-torn country. Throwing their weight behind the fragile process, the meeting hailed Pakistan’s role to facilitate the talks.

The meeting, it added, decided to work out plans to cope with the economic impact of the coronavirus pandemic.

The current trade volume between the two countries, he said, is a mere $800 million, which does not reflect the true potential of bilateral trade.

“We talked about the importance of developing infrastructure especially in the field of transportation and energy,” he said.

He recalled that the first summit was held in Azerbaijan’s capital Baku in 2017, adding that the third edition will be held in Turkey.

“Today we have decided to hold meetings in this format more frequently. So we don’t have to wait three to four years,” he added.

Referring to trade and business agreements signed during Turkish President Recep Tayyip Erdogan’s last visit to Islamabad in February last year, Cavusoglu said the deals would help increase the bilateral trade and investment volume in the days to come.

The two sides, he noted, have increased defense and security cooperation in terms of military hardware.

In July 2018, Pakistan Navy signed a contract for the acquisition of four MILGEM-class ships from Turkey’s state-run defense firm ASFAT.

In October 2019, Turkey’s President Erdogan had cut the first metal plate of the first MILGEM Ada class corvette during a ceremony in Istanbul.

Currently, Cavusoglu went on to say, some 100 Turkish companies are operating in Pakistan in different sectors, including health, education, construction, tourism, and services.

Ankara intends to extend its trade and investment with Islamabad, he maintained.

Baku thanks for support

Azerbaijan’s Bayramov hailed the support of Turkey and Pakistan in solving the Upper Karabakh conflict and invited Pakistani and Turkish firms to help rebuild the Karabakh region recently liberated from the Armenian occupation.

Pakistan’s Qureshi thanked his counterparts for attending the meeting, noting that the top diplomats decided to intensify and deepen the trilateral cooperation.

He thanked Ankara for its consistent support to Islamabad on the Kashmir issue.

Reiterating Islamabad’s support to Turkey on [the Turkish Republic of Northern] Cyprus, he said they demand the resolution of the Nagorno-Karabakh issue in line with the UN Security Council resolutions.