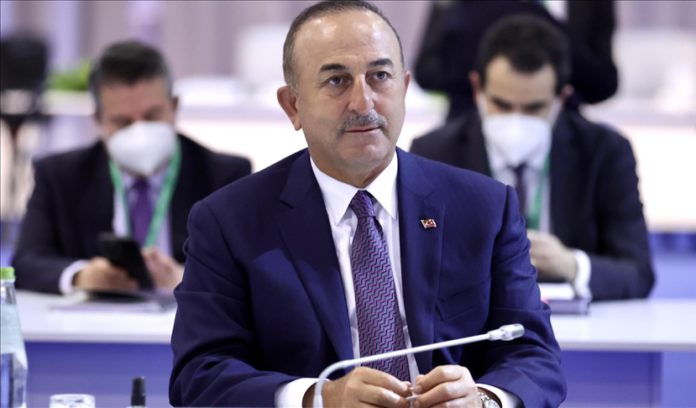 Turkey is the only NATO member fighting the Daesh/ISIS terrorist organization on the front line, the Turkish foreign minister said Monday.

Turkey has been “an active member of the Coalition Against Daesh since the beginning” and “the only NATO member fighting against Daesh on the front,” Mevlut Cavusoglu said.

“Despite its withdrawal, Daesh is still a threat,” Cavusoglu told Italian daily Il Messaggero in Rome before attending the Ministerial Meeting of the Global Coalition to Defeat Daesh, also known as ISIS.

The Turkish foreign minister said Ankara neutralized over 4,500 Daesh/ISIS terrorists and prevented financial aid that could go to the terrorist organization.

He said that some methods used when fighting against Daesh/ISIS had some mistakes, referring to the US aid to the YPG/PKK terror group in Syria.

“The fight against a terrorist group should not be handed over to another terrorist group. The PKK/YPG and the so-called Syrian Democratic Forces (SDF) are extensions of the PKK in Syria. The PKK/YPG needs Daesh to maintain its own importance and is taking advantage of Daesh’s presence,” said Cavusoglu.

He noted that contrary to what has been said so far, the Daesh/ISIS threat is taking deeper roots in Syria, and added that the PKK/YPG terror group is releasing Daesh/ISIS terrorists from the camps under its control in exchange for financial gain.

“A real strategy, it must address deep causes, ensure an effective intelligence sharing, and initiate genuine partnerships with legitimate actors. The ministerial meeting, held in Rome, will provide an opportunity to evaluate our fight against terrorists and discuss the course to be followed,” he added.

Cavusoglu said a stable and prosperous Syria is in the interest of Turkey, as a neighbor.

“The current instability creates a favorable environment for terrorist groups. They pose a threat to Syria’s security, as well as to the security of the region and beyond.”

Cavusoglu said Turkey’s main aim in Libya is to assist the Libyan legitimate authorities in their efforts to guarantee the stability, security, unity, and prosperity of this country.

Responding to a question on whether Turkey and Italy are working together on Libya, Cavusoglu said: “We have always been in close contact and cooperation with Italy on Libya. As NATO allies and co-chairs of the security working group, we can work together in various fields to consolidate institutional capacities and for Libya’s prosperity.”

“Italy is our strategic partner and ally. Turkey stood by Italy in the darkest days of the COVID-19 outbreak. Due to the latest developments and challenges in the Mediterranean, cooperation between Italy and Turkey has become extremely important for the security and stability of the region,” said Cavusoglu.

On the G20, Cavusoglu said the bloc has taken some concrete steps to tackle the economic impacts of the COVID-19 outbreak.

He said, the G20 is extremely important in the face of global challenges and it needs an action-oriented and inclusive approach for concrete results.

Cavusoglu was also asked about the Antalya Diplomacy Forum held on June 18-20 in Turkey’s Mediterranean resort city of Antalya.

“The Antalya Diplomacy Forum aims to listen to new ideas and new approaches on the international platform in the face of different global problems. We need creative and innovative ideas to find solutions to our global and regional problems,” he said.

Recalling that the forum was held in Patara, home to the world’s first democratic parliament, Cavusoglu stressed that thanks to the ecosystem created by the forum, different approaches in diplomacy and new ideas were discussed in detail.