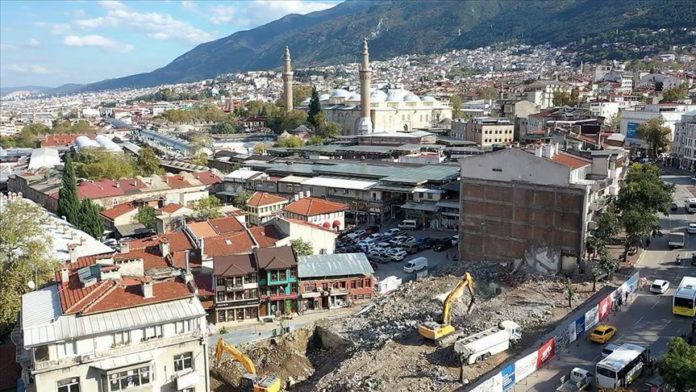 The Historical Bazaar and Inn Area of Turkey’s northwestern Bursa province, known as ”the heart of commerce” for seven centuries and listed as a UNESCO World Heritage site, expects to attract more tourists through new projects.

Owing to the support of President Recep Tayyip Erdogan and under the guidance of Environment and Urbanization Minister Murat Kurum and Bursa Mayor Alinur Aktas, buildings deforming the historical area were demolished to transform the old city into an open-air museum.

Ulu Cami (Grand Mosque) of Bursa became visible also from the center of the old city area. Bursa Metropolitan Municipality had initiated a competition to select a project to be applied in the area, where 40 more buildings will be demolished.

Bursa, one of the former capital cities of the Ottoman Empire, is home to historical mosques, madrasahs — schools — tombs, and other architectural works, and is expected to have more green areas with the new projects.

After the completion of the projects, it is expected that an area of 480 acres around the Grand Mosque will further contribute to tourism.

Speaking to Anadolu Agency, Mayor Aktas said the Historical Bazaar and Inn Area is one of the most significant ones in the city.

The transformation process is continuing, Aktas said, noting that the area will become an open-air museum and attract more tourists.

Thanking President Erdogan and Minister Kurum for their support and contribution, Aktas said the project, to be completed by the end of 2022, will be a big gain for Turkey.