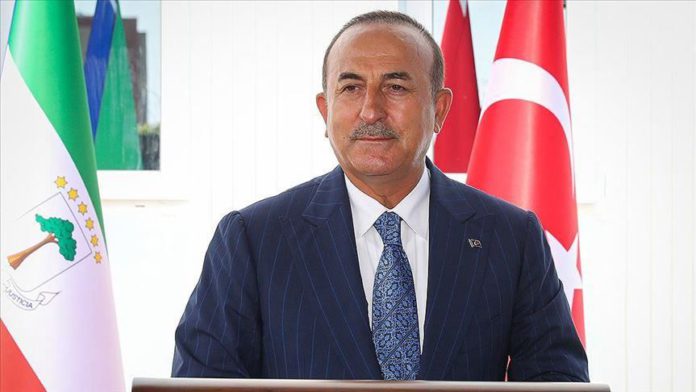 Speaking at the event, Mevlut Cavusoglu said that he is pleased to be the first Turkish foreign minister to pay an official visit to the Central African nation.

Diplomatic relations between Ankara and Malabo were established in the 1980s.

Cavusoglu said: “Especially with the friendship between President Teodoro Obiang Nguema Mbasogo and our President Recep Tayyip Erdogan, our relations have progressed and developed rapidly in the last three, four years.”

Underlining that Turkey attaches great importance to the relations with African countries, Cavusoglu described Equatorial Guinea as “a strategic partner”.

“We visited two more countries in West Africa before coming to Malabo. First Togo, then Niger. We signed nine agreements in total, two agreements yesterday in Malabo,” he said.

“In fact, even these agreements are an indication of our desire to improve our relations with the African Union at all levels,” he added.

After the ceremony, Cavusoglu met with Equatorial Guinea’s President Mbasogo.

Under President Erdogan’s leadership, Turkey has pursued an unprecedented outreach to Africa based on the principle of win-win.

Turkish Embassy in Malabo became operational on June 1, 2018, whereas the first Embassy of Equatorial Guinea was opened in Ankara in December 2018, according to Turkish Foreign Ministry.