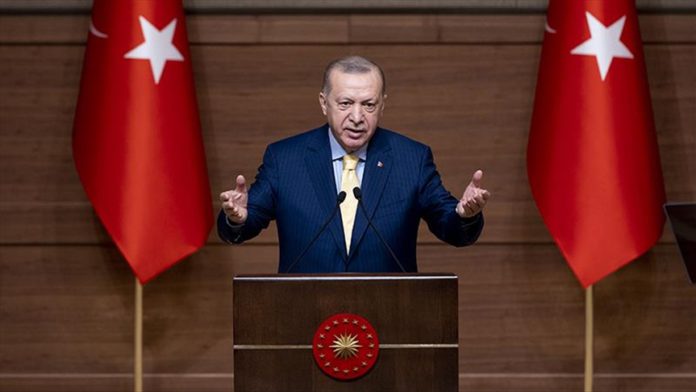 The number of university students in Turkey increased from 1.6 million to 8.4 million over an 18-year period, the country’s president said on Thursday.

Turkey’s higher education has reached a capacity that goes beyond our borders, President Recep Tayyip Erdogan said at a project presentation meeting of the Council of Higher Education in the capital Ankara.

He said the number of universities in Turkey has gone up from 76 to 207 and the number of staff members at these institutes increased from 70,000 to 180,000.

Erdogan said the number of female academics in Turkey’s higher education system is approximately 5% above the EU’s average of 40%.

“Our budget allocation for higher education has also increased significantly, from 2.5 billion liras ($350 million) to 36 billion liras (around $5.05 billion) as of this year,” he said.

The president emphasized that the improvements have not just been quantitative, as the government has focused particularly on quality-oriented structural transformations.

He said around 200,000 students from around the globe are pursuing higher education in Turkey.

According to UNESCO figures, he added, Turkey is among the top 10 countries in the world in terms of enrolment of foreign students.

Since 2001, Turkey has been part of the Bologna Process, the president said, referring to a cooperation mechanism between 48 European countries in the field of higher education.

Under the process, he explained, ministerial meetings are held every two to three years to evaluate the performance of all signatories and set new targets.

A report published at the last meeting on the European Higher Education Area showed that Turkey ranks first in the number of students in all of Europe, Erdogan said.

According to the report, Turkey also performs better than many European counterparts in terms of education quality and expansion of the higher education system, the president concluded.