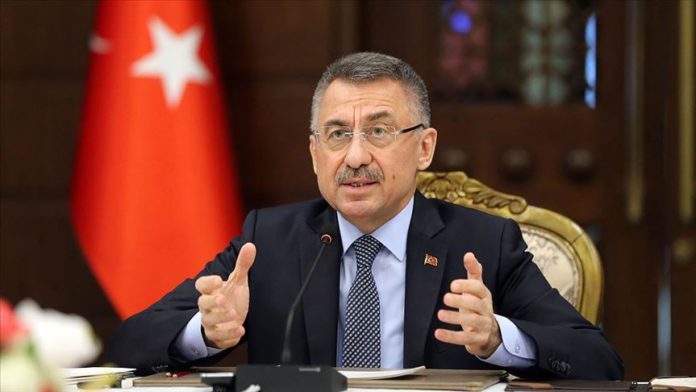 As the world emerges from the novel coronavirus pandemic in the period of “new normal” Turkey will be an alternative global power in production, the country’s vice president said Wednesday.

In a virtual conference held by the Turkish Industry and Business Association (TUSIAD), Fuat Oktay called on business circles to enter into partnerships with international companies to make Turkey a hub in various sectors.

Citing a report from the World Economic Forum, Oktay said that despite an expected prolonged global recession, Turkey distinguished itself through its fiscal discipline infrastructure, efficient crisis management and uninterrupted industrial activities during the pandemic.

He recalled that Turkey’s growth performance was better than any other OECD or G20 country, as well as EU members, with a first-quarter growth rate of 4.5%.

Oktay underlined that the Economic Stability Shield package Turkey launched in March to protect its economy, production capacity and exports from the fallout caused by the coronavirus would help the country keep growing.

Under the allowance to bail out firms amid the coronavirus lockdown, the government paid 60% of staff salaries for a period of three months.

Oktay said the effects of the support package was reflected in economic data such as exports, which posted a month-on-month rise in May.

“We’re determined to protect domestic industry against import pressures with all our policies,” he stressed.

Talks with other countries for currency swaps, updating the Customs Union with EU, trade in local currencies and contactless production are on Turkey’s agenda to mitigate the economic impact of the coronavirus, he added.

“In addition to the swap deal with Qatar which was amended last month, swap talks are continuing with countries that we have signed free trade agreements with and have foreign trade potential,” Oktay said.

He highlighted that economic activity would catch up to its pre-virus potential levels by the third quarter, while expecting a bounce in indigenization, research and development and innovative investments.

Pointing to the importance of focusing on new opportunities that emerge from the crisis, as well as of protecting economic power in the new normal, Oktay said: “The new wave formed by the coronavirus in the global economy is breaking traditional waves.

“However, this break has features that create new opportunities that can be called ‘creative break.'”

He stressed that international companies had begun repositioning their production to Eastern Europe and Africa, rather than the Far East, and some Chinese firms are seeking for new production plants.

“In this environment, you can make Turkey a hub in various sectors by forming new partnerships,” Oktay said, adding that Turkey’s know-how in defense industry, automotive, textile and major appliances exports should be spread to other fields.