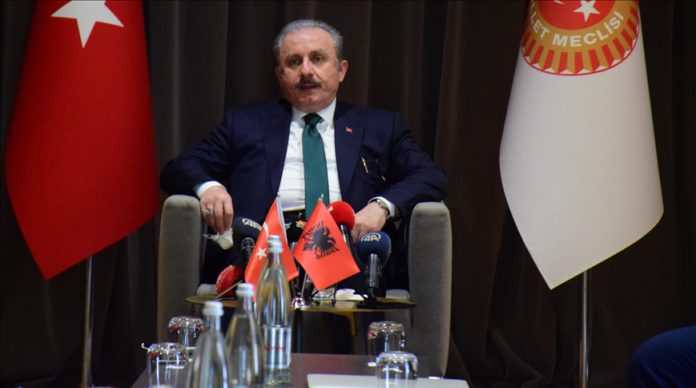 Turkey’s parliament speaker said Friday if there is a constructive approach, steps can be taken and progress can be made regarding a new Constitution.

“New Constitution debates in Turkey have been discussed since 1982 because there is a serious problem regarding the way the Constitution came into force in 1982 and there is a legitimacy debate on this matter,” said Mustafa Sentop.

Şentop answered questions from the media on the second day of an official visit to Albanian.

He said the Constitution was made by an advisory council determined by generals who carried out a coup Sept. 12, 1980.

“Undoubtedly, it was put to a referendum, but the discussions about the content and provisions of this Constitution and the way it was made have not come to an end,” he said. “The most recent government made a change that occurs in a referendum on April 16, 2017, related to the system, but literally constitutional debates did not end in Turkey. In my opinion, it should be ended with a draft of a new Constitution by an assembly elected by the votes of the nation.”

“As a person who has been involved in such efforts before, I’ve welcomed this with greater excitement. Can Turkey achieve this? Yes, it can. It is necessary to approach with sincerity. Imposing approaches are not correct. I would like to say that I am hopeful about this. But the approach that questions sincerity from the very beginning, who attempts to read intentions, who opposes this new Constitution idea with some very edge discussions is not a constructive approach. If there is a constructive approach, steps can be taken on the new Constitution and progress can be made,” said Sentop.

His remarks followed Erdogan’s call Monday for a new Constitution.

Erdogan stressed that the constitutional works must be done transparently and the final text must be presented to the discretion of the nation.