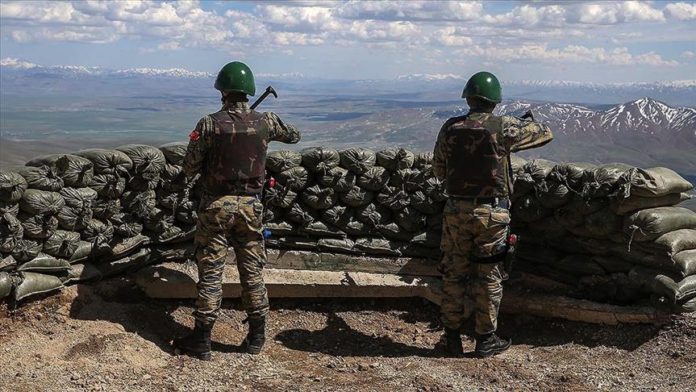 Turkish security forces have neutralized a total of 68 terrorists in domestic and cross-border anti-terror operations over the past month, the National Defense Ministry announced on Sunday.

Spokeswoman Lt. Col. Sebnem Aktop told a news conference that the Turkish Armed Forces continued their operations against terror groups, including PKK, YPG — the PKK’s Syrian branch — and Daesh/ISIS, saying a total of 33 operations have been conducted.

Aktop said Ankara has been following developments closely after an agreement between the central government in Baghdad and the Kurdish Regional Government was inked on Oct. 9 in Iraq on the northern region of Sinjar to “restore public order and stability.”

Iraqi security forces started to implement a deployment plan on Dec. 1 in the center of the Sinjar district of the Nineveh province in an effort to enhance stability and security in the area and enable displaced locals to return to their homes.

The Sinjar deal, inked under the auspices of the UN on the status of the region, envisages clearing the region of the PKK terrorists.

The PKK terror organization managed to establish a foothold in Sinjar in 2014 under the pretext of protecting the Ezidi community from Daesh/ISIS terrorists.

The spokeswoman noted that a total of 5,753 people who attempted to cross the border illegally were held in line with border security regulations during the period, adding that 34,264 people were pushed back before crossing the border.

She added that 39 terrorists, with 24 of them from Fetullah Terrorist Organization (FETO), were also captured.

Aktop also said Turkey, as a guarantor country in Idlib, northwestern Syria, ensured the implementation of the cease-fire, which reduced the tension to a large extent, and helped approximately 450,000 citizens of Idlib return to their homes.

Referring to the A400M aircraft project, she added that the retrofit activities are planned to be carried out for the first time outside of Spain, at the 2nd Air Maintenance Plant Directorate in Turkey’s central Kayseri province.

She said Turkey plans to launch the retrofit activity of the first aircraft in the coming days and complete it within July 2021.

“The Turkish Armed Forces continue their contribution to peace with approximately 3,000 personnel in 14 missions and 11 different regions on three continents,” Aktop stressed.

In its more than 30-year terror campaign against Turkey, the PKK — listed as a terrorist organization by Turkey, the US, and EU — has been responsible for the deaths of some 40,000 people, including women, children, and infants.