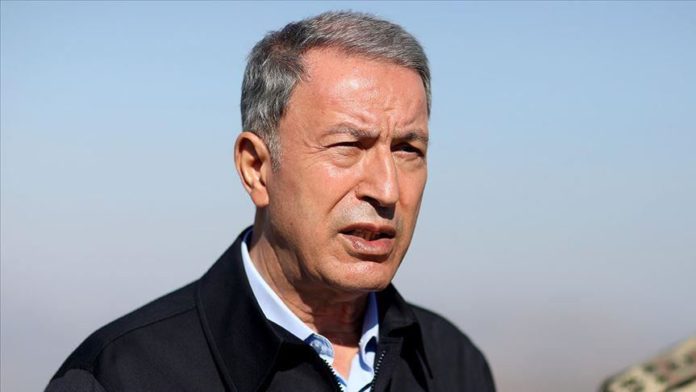 A total of 83 terrorists have been neutralized and a large amount of weapons and ammunition seized as part of operations Claw-Tiger and Claw-Eagle, the country’s defense minister said on Sunday.

Akar said the Claw-Eagle and Claw-Tiger operations, which started on June 16, have been successfully continuing for the last 48 days.

“In the operations carried out by Turkish forces, 83 terrorists have been neutralized so far. A total of 359 mines/handmade explosives and 267 shelters were detected.

“A large number of weapons were seized in these shelters and caves, including 13 AT-4 anti-tank missiles, two guided missiles, 15 Docka [anti-aircraft weapons], 88 AK-47 infantry rifles, and 299 hand grenades,” Akar said.

He also said an operation against the PKK positions in northern Iraq’s Haftanin region was successfully carried out on Saturday, adding that during the operation, some top terrorists were neutralized.

“Our fight against terrorism will resolutely continue until the last terrorist is neutralized,” he noted.

Akar also went to the Yuksekova district of the southeastern Hakkari province by helicopter to inspect the border troops.

Turkey’s operations Claw-Tiger and Claw-Eagle were launched in June to ensure the safety of Turkish people and the country’s borders by neutralizing the threat of PKK, and other terrorist groups, who often use northern Iraq to plan cross-border attacks.

* Writing by Burak Dag in Ankara.