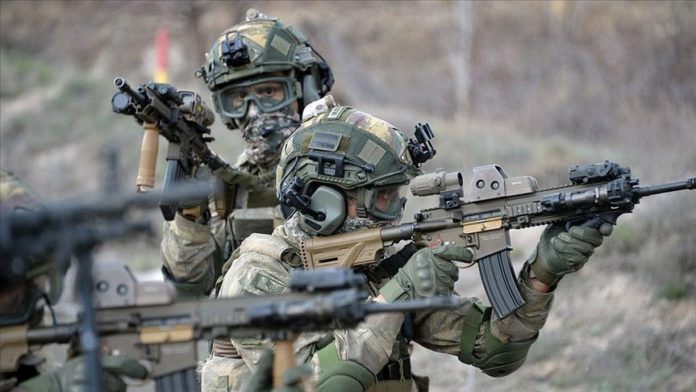 According to the information compiled by Anadolu Agency, 11 security guards and three workers were martyred in attacks of the YPG/PKK terror group during the three-month autumn period.

Many suspects were arrested in the operations against the terrorists across Turkey and 165 of them were remanded in custody.

In October, more domestic counter-terrorism operations were launched in eastern and southeastern provinces, including Van, Diyarbakir and Batman.

A large number of shelters and caves belonging to terrorists were destroyed in the operations.

Senior operatives in the terror group, including many on the wanted list of Turkey’s Interior Ministry, were neutralized in operations during autumn.

Ozlem Atsak, codenamed Rohani Dersim, was neutralized in Bitlis on Sept. 6. She was in the orange category of the Interior Ministry’s wanted list.

Vahiyettin Karay, codenamed Agit Civyan, was neutralized in Van on Sept. 11. The terrorist was in the red category of the wanted list.

On Sep.13, Interior Minister Suleyman Soylu said on Twitter: “Today, after the martyrdom of our soldier in Yuksekova, the perpetrators of many events — Eyyup Alper and Ahmet Akman — wanted in the orange category, were captured dead.”

A terrorist, codenamed Baver-Cektar, listed on the orange category, was neutralized while trying to commit a suicide bomb attack in the Black Sea province of Amasya in September. Later, the terrorist remanded in custody.

Muzeyyen Aydinli, codenamed doctor Amar and inscribed on the red category, was arrested on Oct. 3 during an anti-terror operation in Diyarbakir.

Mazlum Demir was neutralized in a joint operation conducted by the Turkish Armed Forces and National Intelligence Organization (MIT) in Gara, northern Iraq.

Demir, sought with a red notice by Interpol, was preparing to carry explosives and ammunition to Turkey for use in an act of terror.

He was remanded in custody in 2011 while preparing to carry out a bomb attack against security forces in Turkey’s southeastern province of Hakkari.

After being released, Demir, codenamed Jir, took part in terrorist acts in Turkey against security forces between 2013 and 2019, after which he began operating on behalf of the terror group in northern Iraq.

Huseyin Acar, codenamed Dilser, was neutralized in the operation in Hatay on Sep.18 during Operation Yildirim. Acar was in the blue category of the Interior Ministry’s wanted terrorists list.

Yoldas Selim Celik, codenamed Savas, who was the son of a former lawmaker from the Peoples’ Democratic Party (HDP) Demir Celik, was held in Mt. Amanos.

He was in the gray category of the wanted terrorists list.

Demir Celik, who was also the former mayor of Varto, Mus, and head of the Peace and Democracy Party (BDP), remains at large abroad.

Ahmet Cagdavul, codenamed Baran Kici, was neutralized in Sirnak in a joint operation of Turkish intelligence and gendarmerie with air support on Sept. 7.

He had participated in two attacks in the southeastern Sirnak province in May and June, which martyred five workers, including four road construction workers slain by an improvised explosive device.

He was the plotter of the terrorist attack near the local police department in Cizre, Sirnak. The August 2016 attack martyred 12 police officers and wounded 75 others.

Taskin is also known for organizing the transfer of explosives that were used against security forces in separate terror attacks in Diyarbakir in 2016 and 2017.

Ismail Surgec, codenamed Yilmaz, was in the red category of the wanted terrorists list and was neutralized in an operation in the Ahpanos Valley of Tunceli province on Nov. 12.

The terrorist was the so-called person in charge of the province.

Irfan Akcan, codenamed Azad Heset, who was the so-called Sinjar customs official of the terror group, neutralized by the intelligence officers in northern Iraq on Nov. 17.

Hizret Calkin, codenamed Dihlaz was neutralized by Turkish intelligence in an operation in northern Iraq on Nov. 24. He was in the gray category.

He joined the terror group in 2011 and was active in Turkey for a few years before fleeing to Syria in 2014.

Calkin was now responsible for the movement of YPG/PKK terrorists between Iraq and Syria.

Also, as of Dec. 7, at least 225 YPG/PKK terrorists surrendered to Turkish security forces since Jan. 1 as a result of persuasion efforts.

*Writing and contribution by Seda Sevencan