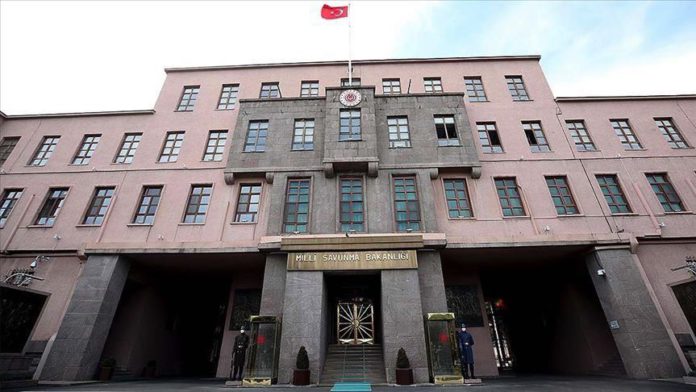 A total of 53 terrorists were neutralized inside Turkey and 66 more in cross-border operations, Maj. Pinar Kara, spokesperson for the ministry, said at a news briefing.

More than 400,000 refugees who had taken shelter in Turkey have returned to their homes in northern Syria, Kara said.

The repatriation of refugees was made possible thanks to improving security and living conditions brought about by Turkey’s diplomatic and military efforts, she added.

According to UN estimates, hundreds of thousands of people have been killed and more than 10 million displaced in Syria, which has been ravaged by a civil war since early 2011, when the Assad regime cracked down on pro-democracy protesters.

Armenia must withdraw from occupied Azerbaijani territory and send back the mercenaries and foreign terrorists it has brought to the region, the Defense Ministry spokesperson said.

Kara said Armenia was responsible for the flare up in violence since Sep. 27 and its forces continue to violate humanitarian cease-fire agreements.

“Turkey will continue to support our Azerbaijani brothers in their righteous cause,” she stressed.

Armenia occupied Upper Karabakh, or Nagorno-Karabakh, an internationally recognized territory of Azerbaijan, in 1991.

Some 20% of Azerbaijan’s territory has remained under illegal Armenian occupation for nearly three decades, despite multiple UN resolutions, as well as international organizations, demanding the withdrawal of the occupying forces.

She reiterated that Turkey’s backing for Libya’s legitimate government, the Government of National Accord, is in line with international law, and Ankara supports the country’s territorial integrity.

Stephanie Turco Williams, head of the UN Support Mission in Libya, hailed the development as “an important turning point towards peace and stability in Libya.”

Turkish President Recep Tayyip Erdogan, however, said the deal “does not seem to be reliable.”

“The cease-fire agreement is not one at the highest level. Time will show how long it will persist at a lower level,” he said on Friday.

Referring to Armenia’s violation of the humanitarian truces in the Armenia-Azerbaijan clashes, Erdogan said: “I hope that doesn’t happen here and this [Libyan] cease-fire decision will be followed.”

The Defense Ministry spokesperson said Turkish forces are providing protection to the Oruc Reis drilling ship, which is exploring for energy reserves within Turkish territorial waters in the Eastern Mediterranean.

The ship’s current mission will continue until Oct. 27, Kara said.

“Turkey, as the country with the longest coastline in the Eastern Mediterranean, advocates for a fair distribution of resources with the consent of all relevant countries,” she added.

Kara also shed light on the extent of the restructuring within the Turkish Armed Forces (TAF) following the defeated coup of July 15, 2016.

“After the defeated coup, around 103,000 new staff, including officers, non-commissioned officers, and professional soldiers were enlisted in the TAF,” she said.

FETO and its US-based leader Fetullah Gulen orchestrated the defeated 2016 coup, in which 251 people were martyred and nearly 2,200 injured.