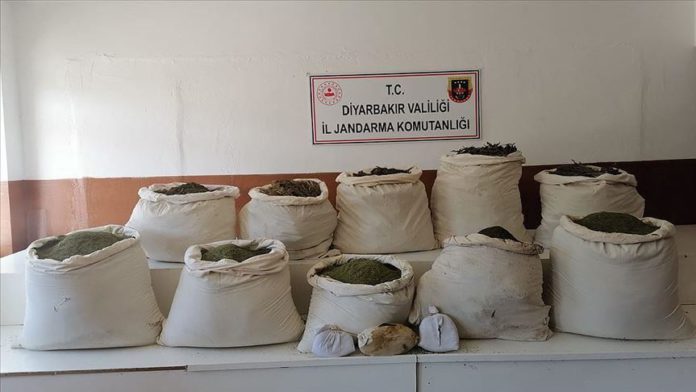 Turkish security units seized more than 2.4 million cannabis roots and at least 235 kilograms (518 pounds) of marijuana in the country’s southeast – a record halt this year – authorities said on Tuesday.

In a statement, the Diyarbakir Governorship said an operation targeting the terrorist group PKK’s illegal drug production and trafficking was carried out in the villages of Yalaza and Baglan in the Lice district.

It is the largest amount seized in a single operation across the country in 2020 so far, the statement said.

The drugs were found inside sacks buried underground, as well as hidden in wooded tracts in rural Diyarbakir.

Turkey’s anti-drug operations, carried out to ensure the peace and security of locals, will continue without any letup, said the statement.

The PKK has financed its terrorist activities through the illegal drug trade since the 1980s, with Interpol estimating that up to 80% of European illicit drug markets are supplied by YPG/PKK-controlled trafficking networks.

Turkish authorities have been confiscating narcotic shipments owned or operated by the YPG/PKK for over three decades.

The PKK – listed as a terrorist organization by the EU, the US, and Turkey – has been responsible for the deaths of nearly 40,000 people, including women, children, and infants. The YPG is PKK’s Syrian offshoot.

Polish football to return in late May