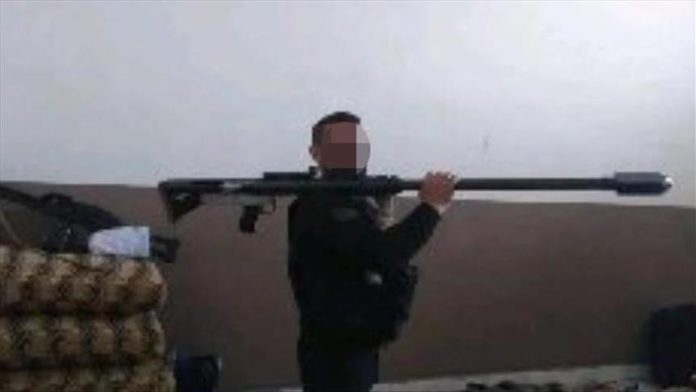 Turkish security forces on Thursday arrested a Syrian national who was preparing to carry out a terrorist act in an operation in the capital.

Police teams detained 10 Syrian nationals in two vehicles in Ankara and seized a mobile phone from one of the suspects that was ready to be connected to an explosive device.

Following recent operations against the PKK/KCK terrorist organization and its Syrian branch the PYD/YPG, Turkish intelligence units determined that the PYD/YPG was preparing to carry out terrorist acts, security sources told Anadolu Agency.

Profiling experts working in the international risk analysis groups formed under the Intelligence and Anti-Terror Branch directorates of the Ankara Police Department traced the suspects, who were determined to have entered the country from Syria illegally.

Intensifying the investigation with the instructions received from the Ankara Chief Public Prosecutor’s Office, the security teams examined the digital materials seized from the suspects.

From the materials examined by the digital and cyber analysis police unit, it was determined that the main suspect was trained by the terror group together with two other suspects.

Photos of the suspects wearing uniforms of the organization’s so-called special forces with long-barreled weapons were also discovered among the materials.

The police teams launched an operation and caught the two other suspects, who were in contact with the main suspect.

Later, photos of explosive materials prepared in Syria were found during the investigation.

A special team of experts from various security departments including the intelligence and anti-terror unit and bomb disposal and investigation branch was formed for the interrogation of the detainees.

The main suspect confessed that he had entered Turkey to carry out a bomb attack, adding he was in the PYD/YPG terror group in Syria for seven months along with one of the other suspects.

The teams determined that the suspects operated in Syria for the terrorist organization and received ideological and armed training and dug tunnels and culverts for the terror group.

It was also learnt that the main suspect, who was trained in explosives, was sent to Turkey to carry out a bomb attack by being offered money.

The security forces also caught those who facilitated the suspect’s illegal entry into Turkey.

The three suspects, who following their interrogation were transferred to a courthouse on charges of being members of an armed terrorist organization and attempting to commit a bomb attack on behalf of the PYD/YPG, were arrested and three other suspects were released on bail.

Other foreign nationals who entered Turkey illegally were handed over to the provincial migration authority for necessary procedures.

Efforts continue to catch other members of the terrorist organization who were identified by the suspects during the investigation and determined by the intelligence and anti-terror unit teams.

In its more than 35-year terror campaign against Turkey, the PKK – listed as a terrorist organization by Turkey, the US and the European Union – has been responsible for the deaths of at least 40,000 people, including women, children and infants. The YPG is the PKK’s Syrian offshoot.