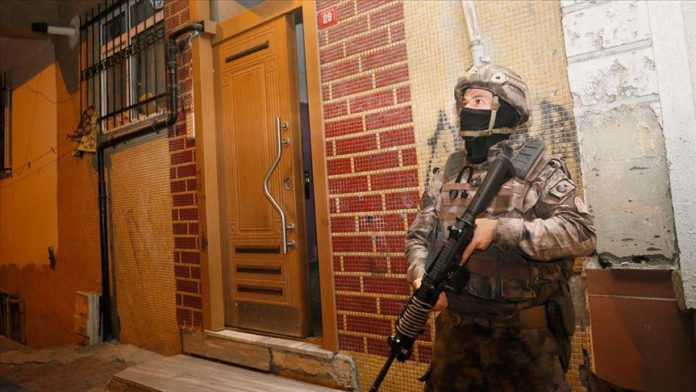 Turkey held over 340 suspects in its continued efforts against the Daesh terror group, also known as ISIS, to prevent multiple deadly attacks across the country in the last month of 2020, according to security sources.

Turkish anti-terror teams nabbed at least 347 suspects, including foreign nationals, thought to have ties to the terrorist organization in several operations in December.

Courts remanded 34 of the suspects in custody, while others were deported and judicial procedures continue against others still.

In the operations, police teams in the capital Ankara detained 18 Iraqi nationals suspected to have links with the Daesh terror group and clash zones.

Eleven suspects were arrested in a separate operation in the western Izmir province, with one of the detainees, Ramazan O. — codenamed Abu Haris — linked to a suspect of a recent terror attack in Austria. Other suspects also had criminal records for various crimes ranging from robbery to kidnapping.

Three of them, including Ramazan O., were detained, while an Izmir court released the others under judicial control.

At least 15 foreign suspects were also held in the Turkish metropolis Istanbul before the New Year.

In a joint operation by Ankara police and national intelligence officers, 35 Iraqi nationals were also arrested over alleged links to the Daesh terror group.

Amid inspections being conducted as part of pre-New Year measures in Izmir province, gendarmerie forces nabbed a Syrian man, Omar al-Ali, who was claimed to be a member of the group.

In the eastern province of Van, another operation resulted in 31 more suspects being held, while an additional five were detained after an operation in the southern Adana province.

Separately, a series of operations carried out at different times in Istanbul led to the arrest of 51 Daesh suspects.

Three foreign nationals were nabbed in an operation in the southern Osmaniye province. One of them, identified by the initials M.M., was acting as the so-called emir of the group, while the other suspects reportedly took part in armed activities.

As part of an anti-Daesh probe launched by prosecutors in Ankara, warrants were issued to arrest 15 suspects. Fourteen of them were held.

A total of 125 suspects including foreign nationals were also held in a number of anti-terror operations in the provinces of Samsun, Sakarya, Kayseri, Denizli, Ordu, Adana, Osmaniye, Duzce, Kocaeli, Siirt, and Mardin throughout December.

Meanwhile, five out of 10 suspects were remanded in custody in southeastern Batman province.

In Adana province, four of seven arrested suspects were also remanded in custody. The convicts were thought to have been plotting attacks on public institutions, political party buildings, and security forces after the terror group’s so-called emir of Turkey, Mahmut Ozden, was remanded in custody in September.

A total of 15 suspects out of 21 were remanded in custody after being arrested in operations carried out in Ankara, Gaziantep, Kocaeli, Sanliurfa, and Kastamonu. The remaining six were released under judicial control.

Seven Syrian nationals were remanded in custody in the central Kayseri province.

Also, a Syrian national promoting Daesh on social media was given a year and three months in prison in Adana.

The country has since been attacked by the Daesh/ISIS terrorists multiple times. The extremist group carried out at least 10 suicide bombings, seven bombings, and four armed attacks, which killed 315 people and injured hundreds of others.

World has alarming increase in COVID cases: WHO chief