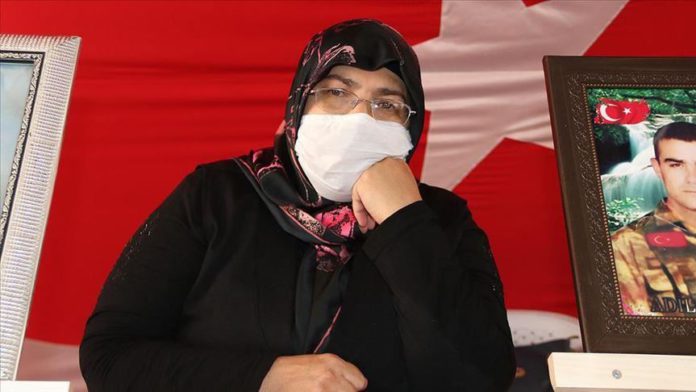 A sit-in protest in southeastern Turkey against the YPG/PKK terror group continued on Monday, with parents demanding the return of their kidnapped children.

Protesters camped outside the offices of the opposition Peoples’ Democratic Party (HDP) in Diyarbakir province and vowed to stay until every child was brought back.

Dozens of mothers began protesting Sept. 3, 2019, outside the offices of the HDP, a party accused by Ankara of having links to the YPG/PKK terror group.

On the 294th day of the protest, mother Songul Altintas said she would not stop the sit-in until her son Muslum, who was kidnapped by the PKK, was brought back to her.

Altintas said her son was first taken to the HDP office and later to the terror group holed up in the region’s mountains.

She said she had been searching for her son for six years and demanded the PKK return him.

“Let them end this persecution, it is enough. We have been crying out for six years, our life is over,” she said.

Altintas said they had not been able to celebrate the Muslim Eid holiday, Mother’s Day or Father’s Day, longing for her son’s return.

Suleyman Aydin, a father searching for five years for his own son, Ozkan, was also taking part in the protest.

Aydin said his son had been kidnapped when he was 15-years old from Sur, a district of Diyarbakir.

“We’ve been in front of a party who kidnapped our children for the past 294 days. Just recently, HDP deputies and administrators were dancing here as if nothing had happened.

Offenders in Turkey linked to terrorist groups who surrender are eligible for sentence reductions under a repentance law.