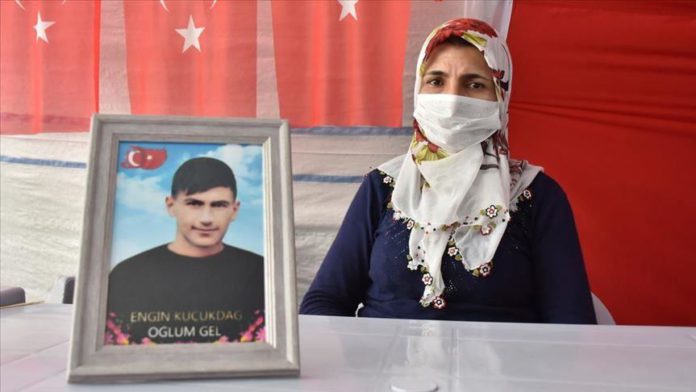 The sit-in against the YPG/PKK terrorists continued Tuesday in the southeastern Diyarbakir province of Turkey, with parents demanding the return of their kidnapped children.

Protesters camped outside the offices of the opposition Peoples’ Democratic Party (HDP) and vowed to stay until every child is brought back.

Kamile Kucukdag came to Diyarbakir for her son Engin who was kidnapped from the southern province of Adana five years ago when he was 15 years old. Kucukdag said she would continue the sit-in until she meets her child.

“If it was God’s path or a path to right, I would have told my son to stay.

“Yesterday four others surrendered, we were really happy, I hope our children also return. My son if you are hearing me please come find a way to run, call me on the phone and I will pick you,” Kucukdag said.

Zumrut Salim, another mother, said she would not leave the HDP office until the day she meets her son.

Salim’s son Hamza was kidnapped six years ago when he was 14 years old. She says they tricked her son and took him to the mountains.

“I want my son from HDP. What do they want from our children? They sentenced them to the mountains and us here, what kind of persecution is this that we are suffering,” said Salim.