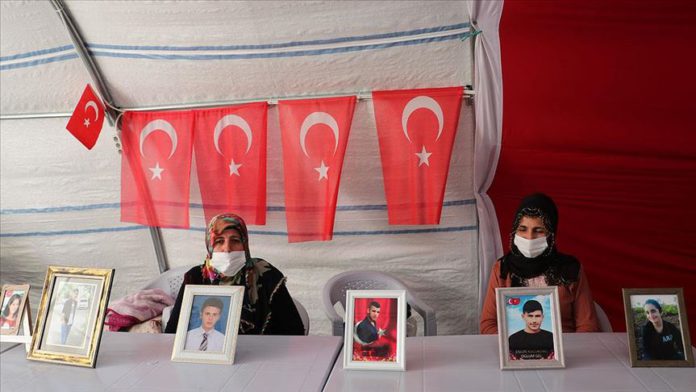 The sit-in protest against the PKK terror group continues in the southeastern Diyarbakir province of Turkey, with parents demanding return of their kidnapped children.

The protesters, camped outside the offices of the opposition Peoples’ Democratic Party (HDP), are demanding that their children kidnapped by the YPG/PKK terrorists be returned.

Solmaz Ovunc, a mother whose child was abducted by the terror group at the age of 15, called on her son to surrender to security forces.

“Come, my child. Those who surrendered are happy and peaceful by the side of their mothers and fathers. I’m waiting for you,” she said.

The weeping mother accused the HDP of tricking her child into joining the terror group, and said brainwashing of the children led to tears of mothers.

Referring to Thursday’s terror attack in eastern Van province, where two social workers helping needy people were killed, the mother said she condemned the PKK terrorists for their oppression.

In its more than 30-year terror campaign against Turkey, the PKK — listed as a terrorist organization by Turkey, the U.S., and EU — has been responsible for the deaths of 40,000 people, including women, children, and infants. The YPG is the PKK’s Syrian offshoot.