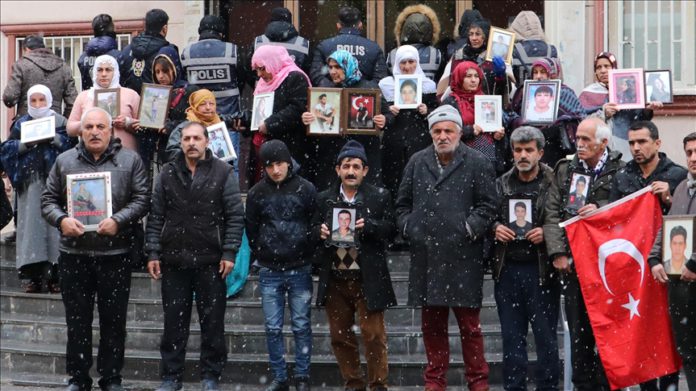 DIYARBAKIR, Turkey (AA) – More than one-and-a-half year has passed since mothers, whose children were abducted by PKK terror group and its Syrian offshoot YPG, began their sit-in protest in Turkey’s southeastern Diyarbakir province.

Nihal Ciftci, one of the protesters, said her son was 14 years old when he was abducted in southeastern Hakkari province.

“My son, Emircan, come back. We are waiting for you with your sibling […] Come, surrender to our security forces. Our state is merciful,” she said.

Aydan Arslan, another woman whose daughter was abducted by the terror group in 2015, accused the HDP of tricking her child and said she would not leave the protest until she reunites with her daughter.

So far, at least 24 families have reunited with their children who fled the terror group and surrendered to Turkish security sources. Offenders who are linked to terrorist groups and surrender are eligible for possible sentence reductions under a repentance law in Turkey.