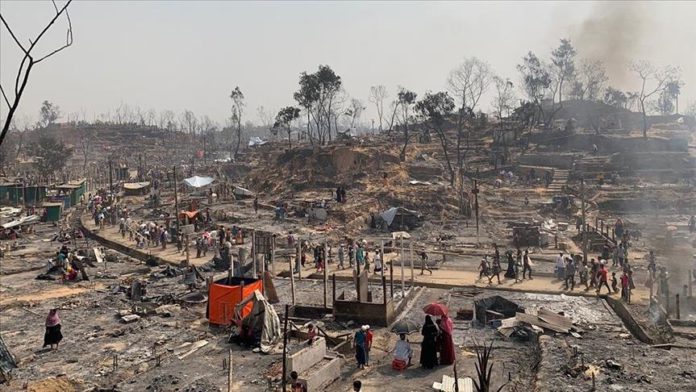 Like in 2017, when the Rohingya crisis hit Bangladesh, Turkey is once more one of the first countries to respond to the unprecedented damage caused by the massive fire that engulfed a large part of the Rohingya camps in Cox’s Bazar.

“The Turkish government has decided to extend a comprehensive emergency assistance to the Rohingya refuses affected by the recent fire at the camps,” Mustafa Osman Turan, Turkish envoy to Bangladesh, told Anadolu Agency, underlining the scope of the devastation and suffering that Rohingya are going through due to this latest calamity.

Turan, upon the instruction of Foreign Minister, Mevlut Cavusoglu, is visiting the camp areas destroyed by the fire, including the Turkish Field Hospital and the shelters built by AFAD, Turkish disaster and emergency management authority.

The deadliest fire that erupted on Monday at around 3:30 p.m. local time (0930 GMT) gutted thousands of makeshift tents of Rohingya until midnight.

The UN on Tuesday confirmed that 15 people were killed and over 550 were injured in the fire, while more than 400 Rohingya were still missing.
In the most devastating fire in the history of Rohingyas in Bangladesh, “around 45,000 people have been displaced, and approximately 10,000 shelters damaged or destroyed,” the UN statement added.

“I saw that the fire had completely burned down all the medical equipment and physical infrastructure of the hospital. We are lucky that nobody in the hospital was injured”, said Turan.

He also confirmed the Turkish government’s decision to rebuild the hospital and 1,337 AFAD shelters that have been destroyed.

Meanwhile, IHH Foundation, a Turkish NGO, has already started providing hot meals to a thousand people the day after the disaster.

Other Turkish humanitarian actors on the ground have also mobilized their resources to respond to the emergency.

Turkish Red Crescent will also distribute emergency food parcels to around 50,000 affected people in addition to hygiene and kitchen kits.

During his two-day visit, the Turkish envoy will meet with Bangladesh’s Relief and Refugee Repatriation Commissioner and other officials in charge of the camp management to discuss how best to support the Bangladeshi government’s efforts to address the crisis.

Turkish envoy was accompanied by the Deputy Chief of Mission of the Turkish Embassy in Bangladesh, Enis Faruk Erdem, and representatives of all Turkish aid agencies operating in Bangladesh during his visit to the destroyed Rohingya camps.