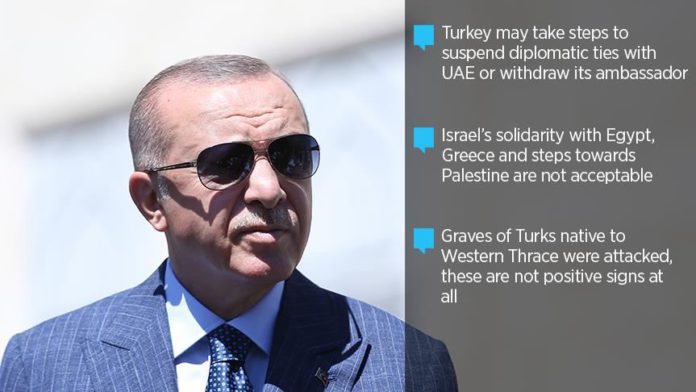 After the United Arab Emirates’ controversial deal to normalize ties with Israel, Turkey may downgrade its relations with the UAE, Turkey’s president has said.

“We may take steps to suspend diplomatic ties with the UAE or withdraw our ambassador,” Recep Tayyip Erdogan told reporters in Istanbul after Friday prayers.

On Israel, Erdogan called its recent solidarity with Egypt and Greece and steps towards Palestine unacceptable.

In signing a maritime pact last week, Athens and Cairo continued efforts to box in Ankara’s territory in the Mediterranean based on small islands near Turkish shores, violating the interests of Turkey, the country with the longest coastline in the Mediterranean.

Israel has taken steps towards closer relations with both Athens and Cairo.

Mistreatment of Turkish minority in Greece

Turning to the mistreatment of ethnic Turks in Greece’s Western Thrace region, where a number of Turkish schools were recently closed, Erdogan said that the gravesites of local Turks had recently come under attack, saying “these are not positive signs at all.”

Decades of Greek mistreatment of the Turkish minority has been ignored by the EU, even as this violates international treaties, high court rulings, and the bloc’s own rules.

On the situation in Libya, Erdogan said a January meeting to help resolve the crisis there had fallen short, saying that “almost no country which was at the Berlin conference on Libya followed its requirements or rules.”

At the conference, global powers and regional actors expressed commitment to support a cease-fire, respect the arms embargo, and support the UN-facilitated political process for Libya.