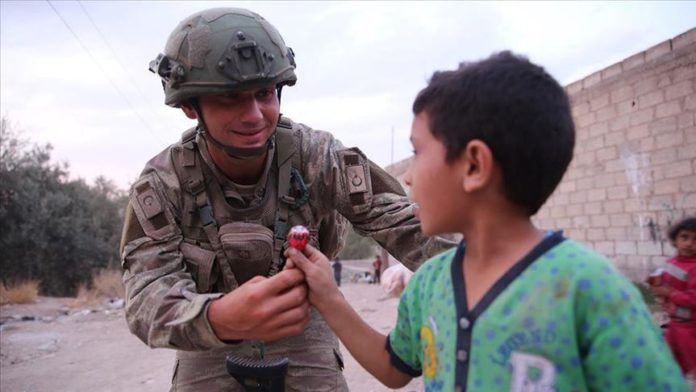 Turkey launched its anti-terror Operation Peace Spring against YPG/PKK and Daesh/ISIS terrorists one year ago on Thursday to destroy a terror corridor in northern Syria and bring peace to the region.

Operation Peace Spring was launched by Turkey on Oct. 9, 2019 to eliminate terrorist organizations threatening its security, particularly the YPG/PKK.

On Oct. 9, President Recep Tayyip Erdogan said on Twitter that the Turkish Armed Forces together with the Syrian National Army had launched the operation against the YPG/PKK and Daesh terrorists in northern Syria.

At the end of the first day around 10.30 p.m. (1930GMT), the Turkish Armed Forces crossed into the region east of the Euphrates River in northern Syria from the town of Tal Abyad, just across the border from the Turkish town of Akcakale.

On the second day, the Syrian National Army entered Tal Abyad at noon, and Ras al-Ayn — another border town further east — in the evening.

With the support of the Turkish military, the Syrian National Army forces managed to advance deeper south, reaching in just four days the M4 highway, one of the operation’s most strategic targets.

With the operation, approximately 600 settlements spread over an area of ​​more than 4,000 square kilometers (1,544 square miles) were liberated from terrorists.

Deals with US, Russia

During a meeting in Ankara on Oct. 17, President Erdogan and US Vice President Mike Pence agreed on a pause of Turkey’s operation to allow for a withdrawal of the YPG from a designated safe zone in 120 hours.

In this period, many members of the terror group were evacuated from Ras al-Ayn to Al Hasakah. While Turkish forces fully complied with the agreement, YPG/PKK terrorists continued harassment fire and other violations.

Five days after Erdogan’s agreement with Pence, a Turkey-Russia summit in Sochi announced another set of decisions on the east of the Euphrates.

The parties agreed that the YPG terrorists would have a 150-hour window starting at noon Oct. 23 to withdraw along with their weapons outside the Operation Peace Spring zone in a 30-kilometer (18.6-mile) strip along Turkey’s border with Syria.

They also agreed on Turkish-Russian joint patrols 10 kilometers (6.2 miles) from the eastern and western boundaries of the Operation Peace Spring zone with the exception of the town of Qamishli in northeast Syria.

Thanks to Turkey’s efforts and support in various fields, the population in the operation zone rose to approximately 200,000, with free healthcare for civilians being a major priority.

Turkey gathered a task force on health services in Syria under a nearby provincial health directorate across the border from the Operation Peace Spring area, as it also had in the Operation Euphrates Shield and Olive Branch regions.

In the Operation Peace Spring region, a variety of free health services are currently offered at two hospitals with 200 beds in Ras al-Ayn and 75 beds in Tel Abyad.

Five health centers were opened to serve the locals in the region, where a total of 1,665 surgeries were carried out in one year and 724 babies were born.

Further, an ambulance wireless communication system was established to ensure communications between hospitals and medical units and to effectively manage emergency teams.

During Operation Peace Spring, the YPG/PKK destroyed many school buildings in the region, using them for military purposes.

After the region was liberated from terrorism, Turkey began to repair the damaged schools.

With the support of the Turkish Ministry of National Education, the needs of classes and students in the remaining serviceable schools were met.

A total of 48,000 students of primary, secondary and high school levels attended lessons this year in the region with the curriculum determined by the Syrian Interim Government.

Another priority from the first day of the operation was to serve the region’s people with an administration run by its residents.

Turkish charities continue helping those in need in the region under the coordination of its Disaster and Emergency Management Authority (AFAD) along with the Istanbul-based Humanitarian Relief Foundation (IHH) and the Syria Support and Coordination Center (SUDKOM) in the southeastern Turkish province of Sanliurfa.

Meanwhile, more than 253,000 of the people’s livestock were vaccinated against disease.