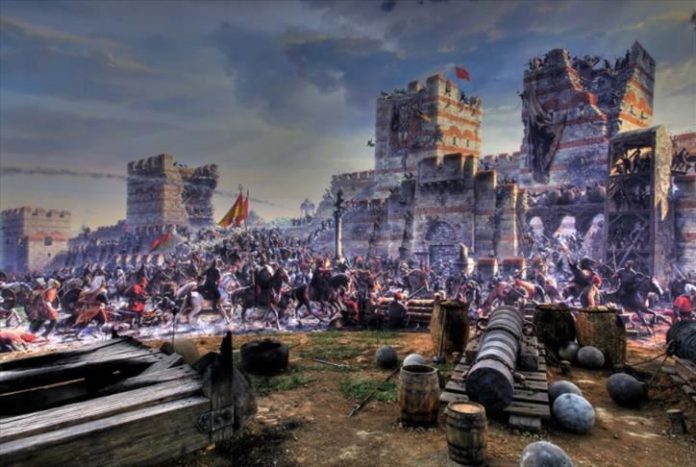 Turkey celebrated on Friday the 567th anniversary of the conquest of Istanbul, dubbed as the start of a new era.

Istanbul, an international city, was besieged 28 times throughout history before its conquest in 1453 by Ottoman Sultan Mehmed II.

The 21-year-old ruler was named Mehmed, the Conqueror in recognition of his victory.

On the night of April 21-22, 67 ships of medium and small sizes were moved to the Golden Horn by soldiers and animals through the bed of Kabatas Stream which poured into the Tophane Port.

The first walls of the city were built in 657 B.C. Roman Emperor Septimius Severus (193-211) demolished these walls during the city’s invasion and built a wall that ended near Hagia Sophia, including the Sarayburnu and the Sultan Ahmet Square.

During the reign of Constantinus (306-337), the city – from the Marmara coast to the Golden Horn – was surrounded by city walls for the third time.

Feridun Emecen, the dean of Istanbul’s 29 Mayis University’s Faculty of Literature, told Anadolu Agency that Istanbul is at a strategically important point, as the city connects the East and the West.

In terms of religion, the history professor added that Istanbul has great significance for both Muslims and Christians.

“The birth of a new empire came to the agenda with the conquest of Istanbul by Fatih Sultan Mehmed,” he said.

“Fatih is the founder of the Ottoman Empire in a way, he did this by conquering Istanbul. Therefore, the conquest, which is a turning point, is of great importance for Turkish history.”

For Fahameddin Basar, a deputy rector at Istanbul’s Fatih Sultan Mehmet Foundation University, what stood out in this conquest was how the Ottoman army moved ships up a hill and entered the Golden Horn.

“The Byzantines, who saw the Ottoman fleet in the Golden Horn on the morning of April 22, were surprised,” Basar said.

“It was never seen before and it was something the Byzantines did not expect,” he added.

Basar described Mehmed II as a “very determined, warrior, and well-educated ruler who had deeply studied the failures in previous sieges of Istanbul.”

“During the 54-day siege, the young emperor used techniques of warfare that were not used in previous sieges,” he added.

For his part, Hanefi Bostan, an assistant professor at Istanbul’s Marmara University’s History department, dubbed the conquest as “one of the biggest and most important achievements in Turkish and Islamic history”.

“Due to its extraordinary effect in world history, [the conquest of Istanbul] ended the Middle Age, the symbol of the darkness and started the beginning of the light, the New Age,” he added.

March 23 – All preparations for the conquest of Istanbul were carried out in Edirne. Mehmed II, who had big cannons fired, set off from Edirne.

April 2 – Venetian Bartolomeo Soligo closed the entrance of the Golden Horn by chaining the entry of its inner harbor.

April 5 – Mehmed II and the Ottoman Army drew near to Constantinople. The army had nearly 80,000 soldiers.

April 6 – The siege started with the firing of the big cannon.

April 22 – Ottoman ships were moved to the Golden Horn via land.

April 28 – Captain Giorcomo Coco, who was tasked with burning the Ottoman ships in the Golden Horn, failed and died inside his sinking vessel.

May 16 – Ships attacked to lift the chain in the entry of the Golden Horn, but the attack failed.

May 13 – While attacks on the Istanbul walls continued, a tunnel, on the other hand, was dug to enter the city.

May 16 – When the sounds of the excavations were heard in the city, the Byzantines noticed it and blocked the tunnel.

May 23 – Mehmed II sent another envoy to the emperor for the last time, but his offer was rejected.

May 25 – The seventh tunnel Ottoman soldiers dug failed too. Mehmed II understood that digging tunnels will cost many lives.

May 29 – The Ottoman Army started an offensive in the first hours of May 29.

The Ottomans carried out the last assault in three waves. During the first two hours, Bashi-bazouks attacked the walls, and soon after Anatolian troops replaced them.

Finally, janissaries – the backbone of the army – stepped in. Finally, in the morning, the Ottoman soldiers managed to enter through the door named Kerkoporta and erected the Ottoman flag on the bastion above the door.

Mehmed II entered the city in the afternoon on the first day of the conquest. He went to Hagia Sophia and prayed there, saying: “My throne is Istanbul from now on”.

Constantinople was conquered after the siege that lasted 54 days with intervals.

The conquest ended the 1,058-year-old Byzantine Empire, the Middle Age came to a close, and Istanbul became the new capital of the Ottoman Empire.

Turkey's milk production up over 6% in Q1j

Turkey brings back distressed father in TRNC amid virus