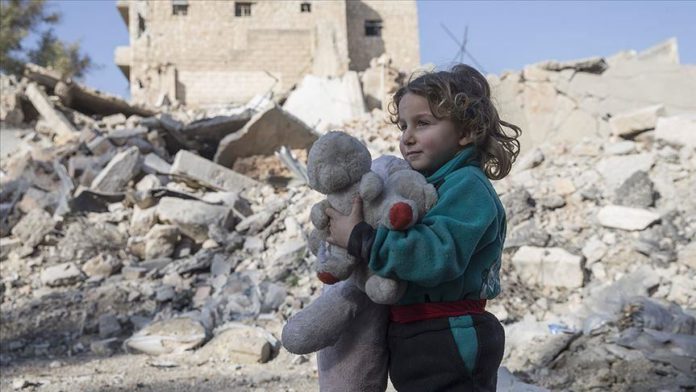 Turkey on Sunday marked the grim 10th anniversary of the Syrian civil war, a conflict that has cost the lives of half a million people and caused the displacement of half of Syria’s population.

Reviewing some of the costs of the war, the statement said: “As of today in the country, 13.4 million Syrians are in need of humanitarian aid. 2.4 million children lack education. 5.9 million people are homeless. The Covid-19 outbreak has further increased the victimhood of the civilian population.”

The statement said that Turkey will continue its effective efforts both in the field and at the negotiating table to protect Syria’s political unity and territorial integrity.

It added that Turkey’s determination to fight all terror groups that threaten Syria’s national security such as Daesh/ISIS and the YPG/PKK will never falter.

The statement said Turkey hosts 3.7 million Syrians – more than any other country in the world – and plays a leading role in meeting their urgent needs.

It stressed that Turkey strongly reiterates its call to the international community, especially the UN Security Council, to fulfill their duties and responsibilities to find a permanent political solution to the Syrian conflict, provide assistance to refugees and the neighboring countries that host them, alleviate the humanitarian crisis, and fight terrorism.

It said after these goals are reached, Turkey would maintain its solidarity with the Syrian people and their legitimate representative.

In March 2011, the people of Syria, inspired by events in Egypt and Tunisia, rose up against Bashar al-Assad’s regime and demanded political reforms and freedoms.

What began as peaceful demonstrations quickly descended into a civil war, as the Syrian people were forced to take up arms to defend themselves against a violent regime.

More than half a million Syrian civilians have been killed in the conflict, over a million have been severely injured, and over 12 million people have been displaced, either internally, or externally in other countries, said the statement.​​​​​​​