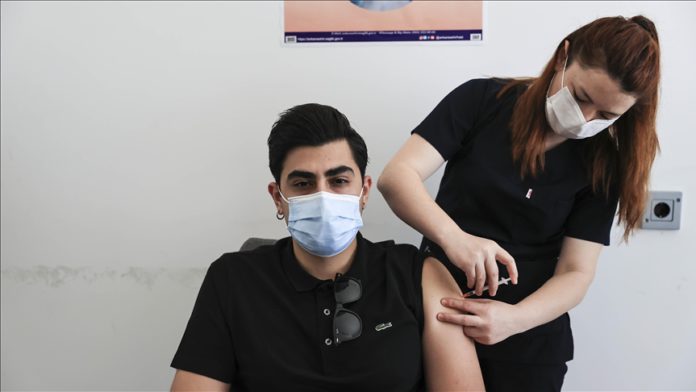 Turkey on Wednesday lowered the COVID-19 vaccination eligibility age to 18, with appointments to be scheduled as of Friday, the country’s health minister said.

Addressing a news conference after a meeting of the Coronavirus Scientific Advisory Board, Fahrettin Koca said Turkey aims to vaccinate 55 million people with at least one shot by mid-July.

Responding to a question about new variants of the virus, Koca said 134 cases of the Delta variant, which was first detected in India, were confirmed in 16 provinces. No cases of Delta Plus variant has been detected yet, he added.

Meanwhile, Turkey’s expedited vaccination drive continues. It administered nearly a million shots in the last 24 hours, according to the latest figures.

In total, the country has given nearly 44.6 million doses since it launched a mass inoculation drive in mid-January.

More than 29.92 million people have received their first doses, while nearly 14.65 million are fully vaccinated, the Health Ministry said.

The ministry also confirmed 5,809 new coronavirus cases, including 565 symptomatic patients. The number of new cases on Tuesday was 6,143.

Turkey’s overall case tally is now over 5.38 million, while the nationwide death toll has reached 49,358 with 65 new fatalities.

As many as 5,917 more patients won the battle against the virus, taking the number of recoveries to nearly 5.25 million.

Over 59.22 million coronavirus tests have been done to date.

The latest figures put the number of COVID-19 patients in critical condition at 763.

Amid a nationwide fall in COVID-19 cases, Turkey is set to end all restrictions, which include nighttime curfews and total lockdown on Sundays, as of July 1.

On June 1, the country eased some measures following a 17-day strict lockdown.

Since December 2019, the pandemic has claimed over 3.88 million lives in 192 countries and regions, with more than 179.28 million cases reported worldwide, according to the US-based Johns Hopkins University.