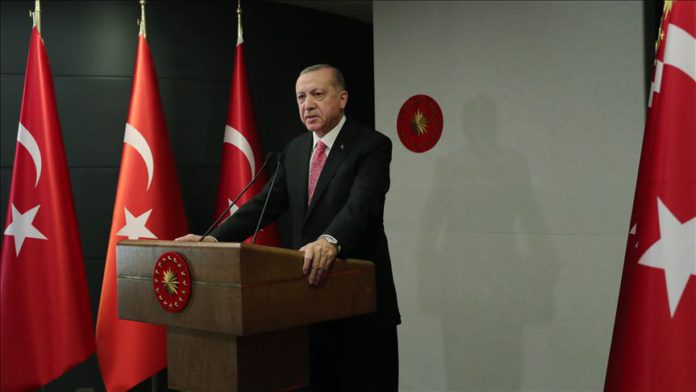 Turkish President Recep Tayyip Erdogan announced on Monday that COVID-19 travel restrictions were lifted in nine more cities, as part of the normalization process as the number of fatalities and cases continue to decrease in the country.

Quarantine has been lifted in 300 settlements, while it continues at 112 locations, Erdogan said.

Also, Turkey will impose a four-day partial curfew beginning Friday midnight in an effort to stem spread of the novel coronavirus, he said.

Erdogan said the four-day partial curfew will be effective as of May 15 midnight.

The first curfew was declared on April 11-12 and it was followed by others in the past weeks.

Children under 14 years will be allowed out on May 20 and 22 during the same hours, also within walking distance and wearing masks, he added.

Highlighting that Turkey successfully continues to fight the epidemic, Erdogan said that the number of new cases, deaths and patients in intensive care are gradually decreasing.

However, he said, citizens should not see the steps toward normalization as returning to life before March 10, the date when the first case of coronavirus was confirmed in the country.

He added that a National Solidarity Campaign to raise money to fight the virus and its impact had netted some 2 billion Turkish liras ($282 million) in donations. Erdogan said he expects donations will continue for the campaign which will last until end of the holy month of Ramadan.

“We are obliged to continue our lives for a long time according to the measures that will protect us against the threat of the outbreak,” he stressed.

Turkey’s success in managing the outbreak draws everyone’s attention, including scientists, he added.

Erdogan also thanked healthcare workers who fight against the virus, on the occasion of the upcoming International Nurses Day, which will be marked on Tuesday.

As of Friday, Turkey registered a total of 3,841 deaths due to coronavirus whereas 95,780 people have recovered from the disease. Currently, there are 139,771 confirmed cases in the country.

The pandemic has killed over 284,500 people worldwide, with total infections more than 4.15 million, while recoveries surpassed 1.43 million, according to figures compiled by the US’ Johns Hopkins University.