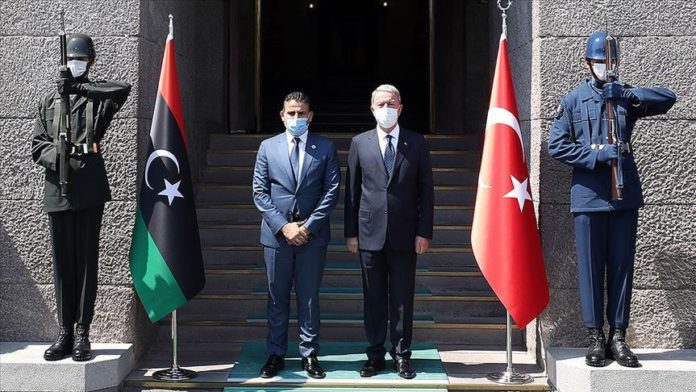 Turkey and Libya will maintain training and consultancy activities in the area of the military and security, Turkey’s National Defense Ministry said on Tuesday.

Defense Minister Hulusi Akar and his visiting Libyan counterpart Salah Al-Namroush led committee meetings in the capital Ankara, including representatives from both sides and agreed to continue training and consultancy, said a ministry statement.

Stating that their countries share a common history dating back five centuries and enjoyed friendly cultural ties, the statement said Akar reiterated that Turkey stands with the UN-recognized Libyan administration in an effort to ensure peace and stability in the country.

Akar said: “Libya belongs to the Libyans” and stressed that Turkey supports an independent, sovereign Libya where territorial integrity and political unity are stabilized.

This March, the government launched Operation Peace Storm against Haftar to counter Haftar’s attacks on the capital Tripoli, and recently liberated strategic locations, including Al-Watiya airbase and the city of Tarhuna, Haftar’s final stronghold in western Libya.

If Sweden considers PKK a terrorist entity, it must do what...