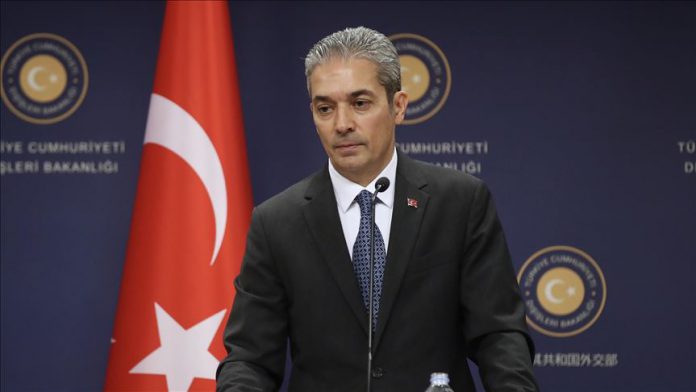 Turkish Foreign Ministry spokesman on Sunday said the recently inked memorandum of understanding between Turkey and Libya’s UN-recognized Government of National Accord (GNA) on the maritime jurisdictions complied with the international law.

“Through this agreement with Libya, the two countries have clearly manifested their intention not to allow any fait-accompli [in the eastern Mediterranean],” Hami Aksoy said in an official statement in response to statements by Egypt and Greece.

The agreement determined a portion of Turkey’s maritime jurisdictions in the region, Aksoy said, adding it “is in accordance with the court decisions that create the international jurisprudence and international law including the relevant articles of the United Nations Convention on the Law of the Sea.”

Reminding that Turkey has the longest continental coast line in the eastern Mediterranean, the statement said: “The islands which lie on the opposite side of the median line between two mainlands cannot create maritime jurisdiction areas beyond their territorial waters and that the length and direction of the coasts should be taken into account in delineating maritime jurisdiction areas.”

Referring to the regional countries, Aksoy said the Turkish government’s action was based on international law and “equity-based approach,” while the countries which reject Turkey’s legitimate arguments took unilateral steps, accusing Turkey.

He also emphasized that the mere presence of the Meis Island — or, Kastellorizo — across the Turkish mainland could not have any effect on Ankara’s maritime territories in contrary to the arguments of Greece and the Greek Cypriots.

Referring to these arguments as “maximalist and uncompromising,” Aksoy said a similar approach once had made Egypt lose 40,000 square kilometers (15,444 square miles) of its maritime territory.