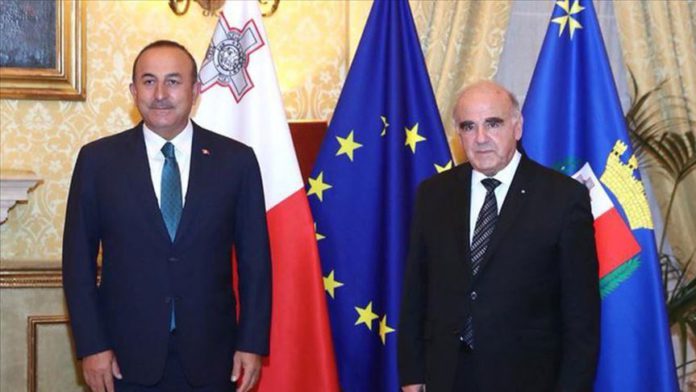 Turkey, Malta and Libya on Thursday agreed to promote joint cooperation, facilitate the return of Maltese and Turkish companies to Libya and resume flights between the three countries, said the Turkish Foreign Ministry.

During the meeting, the sides underlined the need to strengthen Libya’s southern borders and combat human trafficking and smuggling, noting that illegal migration posed a threat not only to the EU, but to Libya as well.

Both Turkey and Malta expressed their readiness to support Libya’s internationally recognized government against illegal migration.

They emphasized the importance of the EU’s participation in “tackling the root causes of illegal migration by helping the development of source countries.”

The three countries also agreed to set up a joint working team to coordinate efforts and cooperation for the transformation of agreements into concrete and practical projects.

During the meeting, Cavusoglu and Bartolo stressed their support for Tripoli, saying: “There is no military solution to the Libyan crisis, and stability and security of Libya are of a great significance.”

The UN recognizes the government headed by al-Sarraj as the country’s legitimate authority, as it has battled warlord Khalifa Haftar’s militias – with the support of Saudi Arabia, Russia, Egypt, the UAE, and France — since April 2019 in a conflict that has taken more than 1,000 lives.

Turkey has also said that an EU operation to enforce an arms embargo on Libya is ineffective and selective, as it fails to intercept arms from Russia, Egypt, the UAE, and others.

Libya in North Africa and the Mediterranean island of Malta are separated by only about 357 kilometers (222 miles).