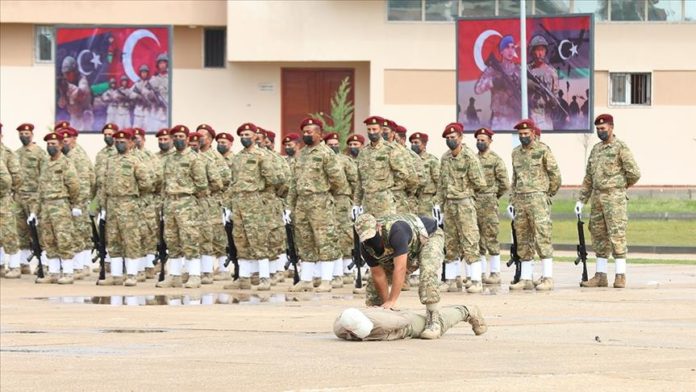 Turkish Armed Forces continues to provide military training, humanitarian aid and consultancy for the Libyan army as a Memorandum of Understanding (MoU) between Turkey and Libya marked its first anniversary Nov. 27.

Turkish Armed Forces personnel, who are in Libya by an official invitation of the UN-recognized Government of National Accord, continue to provide support to hundreds of Libyan military students in various capacities.

The inadequacy of state institutions, especially the lack of a modern and professional army, that emerged after the collapse of the Muammar Gaddafi’s government during the Arab Spring, are shown as the main reason behind many of Libya’s recent troubles.

The MoU involves technical information, support, development, maintenance, repair, planning and material support and training and consultancy services regarding the use of weapons system and equipment.

Numerous steps have been taken to professionalize the Libyan Army by Turkey since the memorandum of understanding was inked.

As part of training support provided for the establishment of the Libyan army and its units to reach international standards, Libyan personnel are trained in five centers, according to security sources.

More than 2,000 soldiers have benefited from training including in the use of air defense systems, mortar firings, annihilation of mine and improvised explosives and duty of forward observation.

Training of hundreds of personnel from the army still continues.

Additionally, Libyan Armed Forces’ personnel also trained on coast guard and base defense and frogman. The training, with around 100 soldiers, lasted four to six weeks.

Students will continue to receive education at military schools in the new academic year.

Mine disposal works continues in Tripoli

As part of the memorandum of understanding and at a request of the Libyan government, Turkish Armed Forces teams continue to work to clear mines planted by militias of warlord Khalifa Haftar in settlements in the south of Tripoli.

Bomb disposal experts of the Turkish Army, along with the Libyan Army, conduct work on the ground with modern equipment, robotic systems, national technologies and equipment, which is produced in Turkey, such as the bomb disposal robots and detectors used clearing mines and bombs.

As a result of cooperation between the two countries, efforts are ongoing to return life to normal by clearing explosives and mines planted in the region.

Libyan Defense Minister Salahaddin Namroush told Anadolu Agency that the Turkish army is a NATO member and has experience that it wants to transfer to Libya and establish a professional army that is up to NATO standards.

The training program of the Turkish military graduated its first students last week with a ceremony held in Tripoli.

Up to the present, Turkey announced its support for UN-led talks in Geneva on Oct. 19-23 which resulted in a declaration of a cease-fire, as it supported the talks in Istanbul and Moscow.

As statements from the Ministry of National Defense underscore, the ground for a political solution was created by virtue of Turkey’s support to Libya.

The statements by Turkey’s defense ministry also emphasize that Ankara continues to support territorial integrity, sustainable cease-fire and ensuring the lasting peace and stability to Libya.