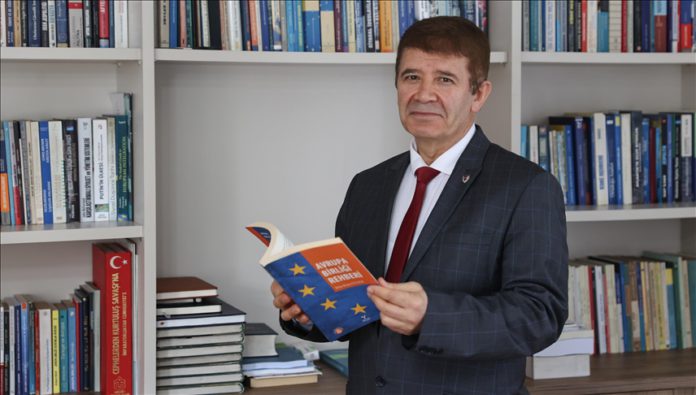 A senior Turkish expert on EU affairs on Wednesday expressed his confidence that Turkey will be part of variable-geometry European Union — a method of integration acknowledging irreconcilable differences.

It has been 62 years since Turkey’s membership application by Adnan Menderes, modern Turkey’s first democratically elected prime minister, to the EU in 1959. Despite the best efforts of Prime Minister Turgut Ozal in 1980s and other Turkish leaders from 1990s onwards, no concrete result has come out yet.

Negotiations for full membership that started in 2004 seem to have frozen after the defeated coup of July 15, 2016 in Turkey.

Turkey, however, has been trying to revive the relations since then.

Turkish President Recep Tayyip Erdogan’s statement that Turkey’s future lies in Europe during his video conference on Jan. 9, 20201 with Ursula von der Leyen, president of the EU Commission, is hailed as a significant step.

EU, on the other hand, seeks its new direction post-Brexit and amid the refugee crisis.

AA: Ulger, as you might recognize starting the accession negotiation on Oct. 3, 2005, was a profound step in Turkish-EU relations like the Customs Union was. However, we couldn’t proceed as we wished in the last 60 years. So, could you please inform us of the latest situation?

ULGER: Let us start then by recalling recent decades of the Turkish-EU relations.The accession negations started on Oct. 3, 2005, five years after the Helsinki Summit of 1999 in which Turkey was officially designated as a candidate country.

The screening process, during which the combability of the EU’s ‘Acquis Communautarie’ with the Turkish law and regulations was examined, lasted one year. And then the issue of negotiation chapters came to the agenda. By then, Turkish public was strongly pro-EU and had high expectations over the country’s membership in the Union. Unfortunately, within the first couple of years, we started to experience frustrations.

Against this background, it would be right to claim that legal and technical problems derived from the EU’s Negotiation Framework, which entails each member states’ approval for new chapters to be opened with a negotiating state, are profound obstacles.

AA: All things considered, would you share with us your perspective on Turkey’s EU membership?

ULGER: In my opinion, Turkey’s ambition for EU membership is right. Historically speaking, the West has been influential in the improvement of democracy and basic rights and freedom in Turkey.

For instance, Turkey’s transformation to a multi-party regime in 1946 occurred under the pressure of the European Council.

Likewise, the increase in Turkey’s prosperity also became possible thanks to its close ties with the EU. Custom Union Treaty of 1996 between Turkey and EU boosted the flow of foreign direct investment to Turkey and hence increased the per capita income.

Turkey is right in thinking that the EU wouldn’t allow it in anyways. Uncertainty on Turkey’s membership seems to have been derived from the EU. Yet, the situation is a bit more complicated.

It has something to do with disagreements between EU member states regarding which direction the EU should follow after the enlargements which incorporated former Eastern Bloc countries.

Secondly, after the rejection of the draft for the EU Constitution by France and the Netherlands in 2005, further integration of the Union stalled.

Thirdly, we presently witness emergence of Islamophobia and Xenophobia, and populist ultra-nationalistic parties. This, combined with the flow of refugees to Europe from the Middle Eastern countries after the Arab Spring, negatively influenced the European public view of Turkey.

There are countries such as Spain, Italy, and Malta which support Turkey’s membership. They, however, are not able to convince others to allow Turkey in.

AA: As you might have followed, Erdogan held a video call with Ursula von der Leyen on Jan.9, and Foreign Minister Cavusoglu met EU foreign policy chief Josef Borrell in Brussels. Under the light of these recent developments, do you think problems between Turkey and the EU will be solved sometime soon?

ULGER: In my view, there are now three options ahead for Turkish-EU relations.

First, the EU accepting its mistakes and developing a positive, constructive attitude toward Turkey. This, nevertheless, seems not so likely.

The second, Turkey cutting its ties with Europe and aligning itself with Russia, China, and Iran, and focusing on the East. I consider this extreme and unlikely.

And the third option is redefining the Turkish-EU relations by taking into consideration the historical context. What I mean is an agreement like the European Free Trade Agreement (EFTA) which would allow the free flow of goods, services, capital, and people between Turkey and the EU.

I believe through such agreement, which I see likely, Turkey will fortify its position in Europe and the world.

AA: What would you suggest to the Turkish public? Shall we stay frustrated or develop a rational approach on Turkish-EU relations?

ULGER: Historically speaking, Turks have been a part of European history. Hence, it is only normal for Turkey to take its place in the European Union. Owing to human potential and the spirit of entrepreneurship it has, Turkey potentially can fill the vacuum left by Brexit. In this regard, I see the recent reform push mentioned by the government as an important chance to restore Turkey’s image in Europe.

AA: Lastly, contemplating the economic and political developments produced by the pandemic and Brexit, I would like to ask you what kind of future you predict for the EU?

ULGER: I am convinced that the Union will include a different, variable structure in the future. At the core, there will be states which attained the highest level of integration. The second circle will consist of the Eurozone countries. The third circle will be the EFTA-like zone. And the last circle will be a custom union zone. Turkey is currently in the fourth circle.

Yet, I believe it will be possible for Turkey to take place in the third or even the second circle.

I would suggest being pragmatic toward the EU rather than over-pessimistic or optimistic.