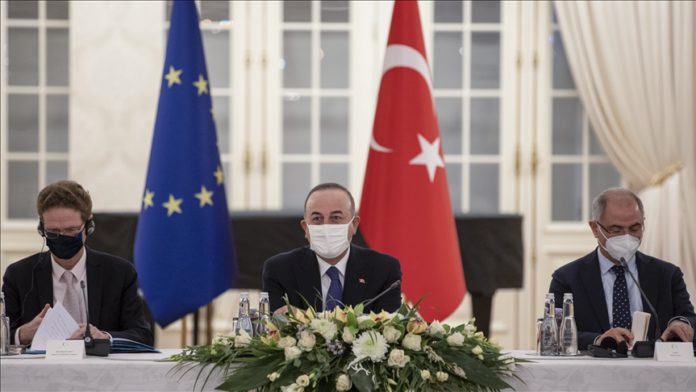 Turkey is determined to press ahead on EU accession reforms, Turkey’s foreign minister told a group of European Union diplomats on Tuesday.

“We are determined [to apply the] reform agenda,” Mevlut Cavusoglu told the EU member state ambassadors, meeting at the official Cankaya Palace in the capital Ankara.

“The EU should not hinder but give support to us,” he added.

Saying that the bloc and Turkey are tied closely, he explained: “Turkey is in Europe, and Europe is part of our destiny. The same thing applies to Europe.”

Turkey, an EU candidate country since 2005, plays a large role in the security of Syria and Libya plus the Caucasus, Balkans, Middle East, and Black Sea regions, and also has a key part in migration, energy, trade, supply chains, transportation, communication, security, counter-terrorism, NATO, and defense, he stressed.

“All these issues are vital for both the security and prosperity of Europe. If we act together, we can make significant changes in all areas. As Turkey, we are ready for this partnership,” he said.

Unfortunately, he said, the desired cooperation between Turkey and the EU had failed to materialize over the years due to some bilateral issues that remained unsolved, and this was also a loss for Europe.

Cavusoglu said they have repeatedly urged the use of dialogue to solve these bilateral issues, and in this process, they expect progress in concrete areas in relations with the EU.

“Turkey is dependent on the EU accession process. If we find a positive response from the EU, we also show the necessary will,” he said.

Later Monday Turkish President Recep Tayyip Erdogan is due to also meet with the EU ambassadors.

Despite its EU candidate status, Turkey’s progress towards accession has been stalled for years.

After a year of ups and downs, including a push by some EU member states to impose sanctions on Turkey over bilateral issues, Turkish leaders have said they hope for progress in ties with the bloc this year, and expect the EU to take steps towards this end.