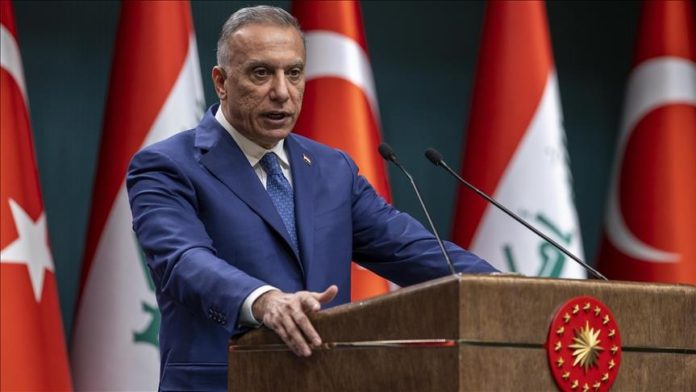 Ankara and Baghdad are keen to boost ties in many areas, a Turkish expert on the Middle East said, as the Iraqi prime minister visited Turkey for talks this week.

“I think it’s known that Turkey is a major force in eliminating the security problems of Iraq as well as restructuring and development of the country,” Ali Semin, a Middle East expert, told Anadolu Agency.

The Iraqi prime minister’s remarks that Turkey is a very significant country in the Middle East show that Iraq wants to further develop relations with Turkey, according to Semin.

Speaking on the visit, Semin said Iraq, a country struggling with internal and external problems, wants to benefit from Turkey’s experiences.

The expert stressed that Iraq has many problems such as security, the fight against corruption, economic crisis, problems with the Erbil administration, the effects of tension between Iran and the US plus militia forces that are out of state control.

Stuck between Iran, the US, and the Arab world, Iraq needs Turkey, Semin stressed, adding: “[Al-Kadhimi] thinks that Turkey is a very serious windpipe.”

“Turkey is truly the only solution for Iraq’s prosperity. But Turkey also has expectations,” Semin said.

Referring to the problems between Turkey and Iraq, Semin noted that Iraq should invest in water to solve its water problem.

Mentioning the lack of infrastructure in Iraq to use the water coming from Turkey, Semin said: “[Iraq] needs to build dams, invest in water, and solve the infrastructure problem. To increase the water supply is not a problem for Turkey. But even if the amount of supplied water rises to 10%, Iraq will still need water because there is no structure to use it consciously.”

Reminding a joint target of expanding the bilateral trade volume to $20 billion, he said this goal could not be achieved due to the capacity of Habur Border Gate in the Silopi district of Turkey’s southeastern Sirnak province, which could only happen with the opening of the Ovakoy Border Gate.

According to Semin, PKK elements located within the boundaries of Iraq is not only a problem for Baghdad and Ankara, but for the whole region.

Highlighting that there are no Iraqi military forces in the area where Turkey conducts anti-terror operations, Semin said Turkey was threatened from that region.

He added that if the terrorist organization’s infiltration from this area was blocked, Turkey would cease operations in the region.

“According to a security cooperation agreement between Turkey and Iraq, signed in 1983, Turkey has the right of hot pursuit in Iraqi territories to a depth of 10 kilometers [6.2 miles],” he added.

According to Semin, the Kurdistan Democratic Party and Patriotic Union of Kurdistan have also come closer on PKK in northern Iraq: “Both in northern Iraq and in Baghdad it is seen that the PKK is not only a threat for Turkey but also for Iraq.”

“Even in the Sinjar region, Erbil and Baghdad saw that the PKK established a canton similar to the ones in Syria,” he added.

Recalling an agreement between Baghdad and Erbil against the PKK’s structuring in Sinjar, Semin said the region is 100 km (62 miles) away from Turkey and 50 km from Syria.

“During the Saddam Hussein period, missiles were fired from here to Israel. So, Sinjar is a threat to Turkey, Israel, and Syria,” he added.

According to Semin, if Ankara, Erbil, and Baghdad prevent the PKK’s presence in Sinjar and members of the organization from crossing into Syria, the PKK will be besieged and lose Makhmour and Qandil.

He emphasized that Iraq’s control of the Syrian border is of key importance.

Stressing the importance of Turkish business people for the reconstruction of Iraq, Semin said Turkey might sign an agreement with Iraq on helping to rebuild Iraq in exchange for the country fighting against terrorism.

“Accordingly, investment support should be given to Iraq as well as economic and military aid.

“Even Masrour Barzani, the prime minister of the Kurdish Regional Government in Iraq, complained to the US Central Forces Command [CENTCOM] about the use of weapons given to PKK extensions in Syria against them in Iraq,” he said.

“This is the first time a Kurdish prime minister saying this,” he explained. “There is a great opportunity right now to fight the PKK. Turkey should urgently make use of this opportunity. So, cooperation should be made with Iraq on Sinjar.”

Reminding the attacks on the Kirkuk-Yumurtalik [Ceyhan] oil pipeline, Semin said this line should be revived for the benefit of both Turkey and Iraq.

*Writing by Handan Kazanci in Istanbul