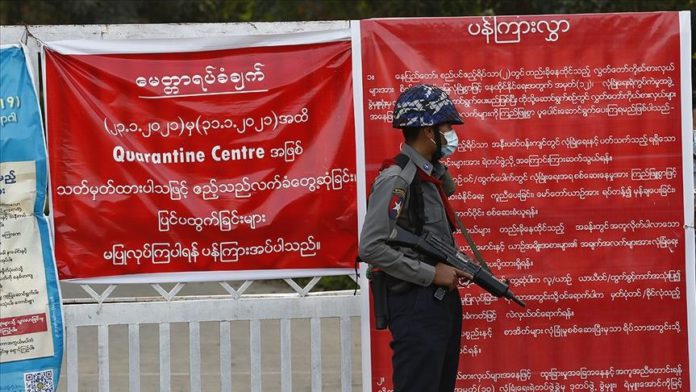 Turkey and its four partners in a cross-national dialogue group on Wednesday expressed concern over the political situation in coup-hit Myanmar.

“We are concerned over the recent political situation in Myanmar and we call for the adherence to the rule of law, good governance, the principles of democracy and constitutional government,” read a joint statement by the foreign ministers of Mexico, Indonesia, South Korea, Turkey and Australia, whose initials make up the group’s acronym, MIKTA.

“Furthermore, we urge all parties in Myanmar to exercise self-restraint and put forth dialogue in finding solutions,” the statement added.

“We reiterate our continued support for the United Nations system and initiatives such as the Access to COVID-19 Tools Accelerator and its COVAX Facility, amongst others, to ensure an effective response to our common challenges,” it added.

According to the statement, the group affirmed its commitment to “acting in full solidarity to overcome the pandemic while minimizing its economic and social impacts.”

“MIKTA countries will continue to collaborate and exchange best practices, including to achieve extensive immunization against COVID-19,” the statement added.

Calling for equitable access and distribution of safe, affordable and effective COVID-19 vaccines for all, it called on all stakeholders to further strengthen international cooperation in this regard.

The statement also stressed “the launch of dialogue channels among our health ministries, ministries in charge of women affairs, development cooperation agencies and academic experts.”

MIKTA will be chaired by Australia in 2021.

All five countries in the group, which was established in 2013, are G20 members recognized as middle-power countries in international diplomacy.