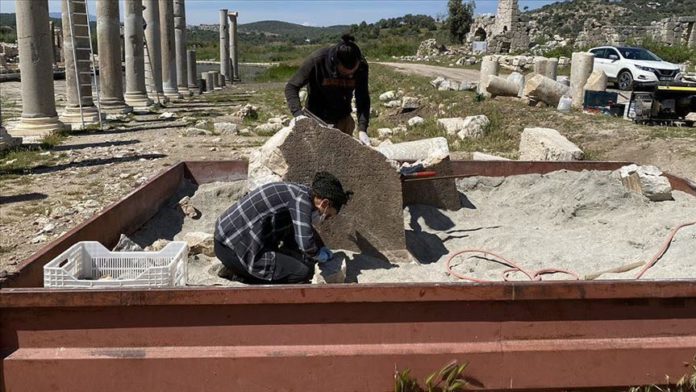 An excavation team in the ancient city of Patara, located in Turkey’s Mediterranean coast, unearthed an inscription in an ancient theater.

Located in the Kas district of southwestern Antalya province, Parata is known as the capital of the ancient Lycian civilization, which consisted of 23 cities in the middle of the first century BC.

Chief excavator Prof. Havva Iskan Isik of Akdeniz University told Anadolu Agency that during their work at the ancient theater, they identified an inscription honoring one of the important citizens living in ancient times in Patara.

“It is an important inscription and it excited us. It was a gift to us for the ‘Year of Patara’,” she said underlining that the inscription is a very big work in pieces and the experts from Antalya Restoration Laboratory started to restore it.

“The inscription scientists [Epigraphists] who worked in Patara excavation started studies on reading [the inscription]. The name of the citizen and the content of the inscription will be revealed in a short time,” she added.

President Recep Tayyip Erdogan in February, announced 2020 as the year of Patara in a bid to promote and draw more attention to the ancient city.

With its history and historical characters related to it such as; Alexander the Great, Emperor Nero, St. Nicholas, known as Santa Claus, and Abdulhamid II, the city is well known as the “cradle of civilizations”.

It was home to one of the world’s first democratic parliamentary systems and was also a hub for ancient Egyptian traders.

With its 6,000-year-old heritage, the region is also well known for the remains of the Lycian parliament building and its lighthouse, possibly the world’s oldest, as well as its tranquil beaches.

93 sites of 'potential human burials' found near residential school in...