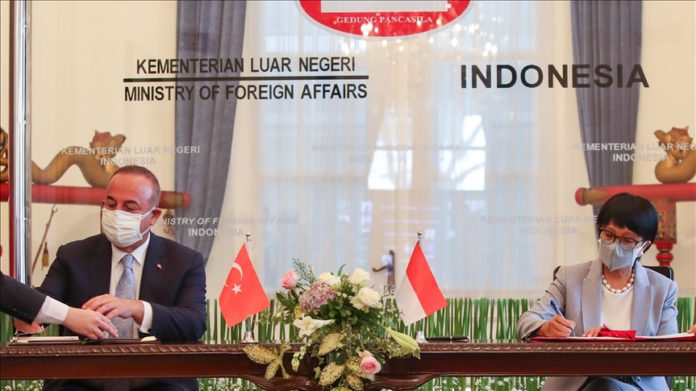 Indonesia and Turkey have agreed to enhance cooperation, particularly in trade, defense, and investment, the Turkish foreign minister said on Tuesday.

“Indonesia is our key partner in this region. Our cooperation in economy, trade and defense industry are improving,” Turkish Foreign Minister Mevlut Cavusoglu said at a joint news conference with his Indonesian counterpart Retno Marsudi in the capital Jakarta.

Cavusoglu noted that both countries have many advantages, particularly in terms of cooperation in the defense industry. “Turkey has been investing a lot with the best quality, very competitive price, and no political obstacle,” the foreign minister said.

However, he pointed out, the trade volume between Turkey and Indonesia is at about $1.5 billion, which is far below their true potential compared to their total population of 350 million.

“$1.5 billion is far behind our true potential. We agreed to reach our common goal which is initially $10 billion,” said the minister.

Cavusoglu said they also agreed to increase investment in both countries, adding that Turkish companies are really interested to invest in Indonesia despite the pandemic.

He added that he and Marsudi also discussed the Public-Private Partnership (PPP) model, particularly in the construction sector.

Highlighting the fact that Turkey’s PPP is becoming a global model, Cavusoglu said the country is ready to share its experience with Indonesia.

“We have carried out so many major projects in Turkey through the PPP model and Turkish construction companies are second in the world after Chinese firms,” he said.

“They are also interested to undertake the project that Indonesia is planning to realize in the future.”

Marsudi, for his part, said that both countries agreed to continue Indonesia-Turkey Comprehensive Economic Partnership Agreement (IT-CEPA) negotiation, which is expected to be completed in 2021.

It was a mandate given directly by President Joko Widodo and President Recep Tayyip Erdogan to finalize the negotiations in this regard, she said.

“IT-CEPA has the potential to increase bilateral trade between Indonesia and Turkey,” Marsudi added.

Cavusoglu also conveyed greetings from Erdogan to Widodo during his meeting with the Indonesian president after the news conference.

He added that Turkey’s relations with Indonesia, its key partner in Southeast Asia, is currently developing in various fields.