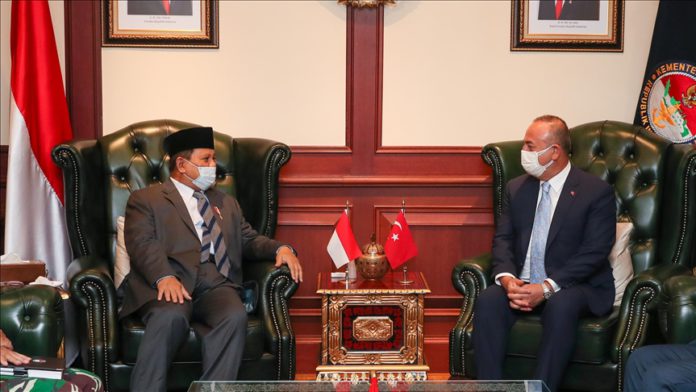 Turkey’s Foreign Minister Mevlut Cavusoglu has said there is need to explore the huge trade potential with Indonesia to the fullest.

In an interview published in Indonesian daily Kompas on Tuesday, Cavusoglu said the two countries need to boost cooperation to maximize trade volume.

Cavusoglu said that currently the relationship between Turkey and Indonesia has increased to a more strategic level and Ankara is preparing for the High Level Strategic Council meeting.

He said at the meeting members of the Cabinet of the two governments are expected to explore opportunities for cooperation, adding that Turkey aims to reach $10 billion in trade volume.

“With 270 million of Indonesia’s population and 85 million of Turkey’s population, the total will be 355 million. This is a big potential,” the daily quoted Cavusoglu as saying.

Regarding Indonesia’s plan to move its capital to the island of Kalimantan, the minister expressed Turkey’s interest in infrastructure projects in the future capital city.

“Turkey is at the forefront of construction, as well as infrastructure,” he added.

Cavusoglu, who paid a working visit to Indonesia on Dec. 20-22, highlighted the potential for cooperation in the defense industry, saying that Turkey is one of the leading countries in that field.

“The three advantages offered by Turkey are quality, competitive prices and there are no political obstacles in the process,” he said as quoted by Kompas.

The two countries cooperated on the Tiger tank, which was developed by Indonesian military products manufacturer Pindad from a Kaplan tank made by the Turkish company FNSS, according to the report.

It said that the Philippines and Pakistan have also expressed their interest in that tank.

“For Indonesia, the Tiger tank may not be the last product developed together with Turkey,” he said.

Cavusoglu also expressed his hope that investment between the two countries will continue to increase, noting that Indonesia’s investment in Turkey has been smaller than the other way around.