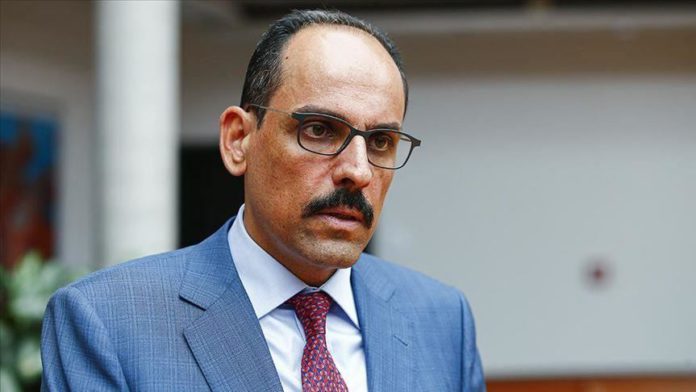 Turkey’s presidential spokesman Ibrahim Kalin on Friday said Ankara is in favor of a political solution in Libya.

Speaking to reporters after his official visit to Berlin, Kalin said Libyan warlord Khalifa Haftar violated the Berlin agreement like many others before it.

Kalin said Turkey will not undermine any call for a cease-fire but it is important to see where this call is coming from and what is the motive.

“When he starts to lose position, he immediately declares a ceasefire and tries to open a space for himself.”

Instability in Libya will affect North Africa and the south of Europe from there including NATO’s border, said Kalin.

“One of the most important points of illegal immigration is Libya. Because it is very close to Europe. There is Malta right across. It is the neighbor of Italy and Spain. If there is instability in Libya, if the war continues, illegal migration continues, drug trafficking and human trafficking continue, this affects NATO’s security as well as Europe’s security.

“It also affects our security. Because in this age of global relations, an incident in Libya is not isolated. This concerns us, and also concerns the peace and stability in our region. Ensuring peace and stability there, to end the war, is in the interest of Turkey as well as Libyan people.”

Evaluating the EU presidency which Germany will assume from July 1, Kalin said: “Germany is one of the key actors in the EU. There is a chance to take some positive steps in the Turkey’s EU membership process in Germany’s term presidency.”

“Schengen visa liberalization, the inclusion of Turkish citizens in the Schengen system, updating the customs union, the resumption at all levels of political consultations, the updating of the Turkey-EU immigration deal and the revision in the current circumstances, opening of new chapters are the fields that we can gain together.”

He urged Germany to exempt it from its travel warning to non-EU countries as Turkey had managed the coronavirus pandemic better than most countries.

“We have gone through this process with the least losses. But it is not completely finished. That’s why we continue to apply the measures. But now the tourism season has come. Now, we have gone to the second stage where the measures have been eased slowly.”

Turkiye's talks with Sweden, Finland on NATO bids did not happen...