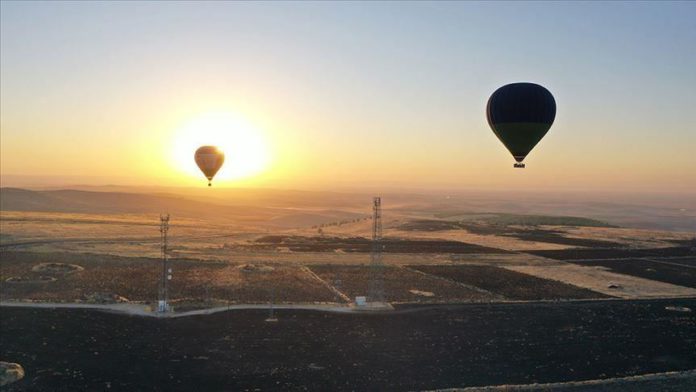 Colorful hot air balloons floated over the skies of Gobeklitepe, a UNESCO World Heritage Site in southeastern Turkey, attracting local and foreign tourists to be above the world.

The company operating the hot air balloons over Gobeklitepe started the flights after completing the test and presentation stages, local authorities said Monday.

The flights would start at dawn allowing tourists and adventurers to watch Gobeklitepe and the city of Sanliurfa from the sky. The flights are planned to take place at intervals until December because of the COVID-19 measures.

A balloon pilot, Bilge Ezel, said they had made arrangements in line with preventive measures in place to avoid COVID-19. “We aim to take Gobeklitepe to the sky,” Ezel added.

Gobeklitepe in the Turkish province of Sanliurfa was discovered in 1963 by researchers from the universities of Istanbul and Chicago.

After President Recep Tayyip Erdogan declared 2019 the “Year of Gobeklitepe”, the number of visitors increased significantly at the site, which is visited by many local and foreign tourists every year.