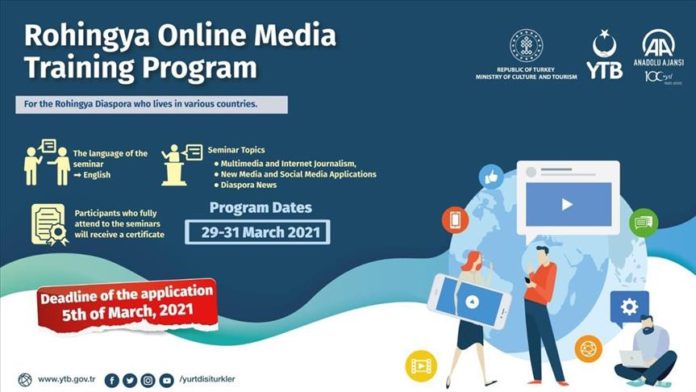 The Rohingya Online Media Training Program was held via videoconferencing on March 29-31, and included about 30 participants from the Rohingya diaspora in various countries.

Training on Multimedia and Internet Journalism, New Media and Social Media, and Diaspora Journalism were conducted in English by the agency’s experienced staff over the three-day period.

“Anadolu Agency gives voice to the oppressed … and also contributes to the capacity building of young journalists through these workshops,” said Alptekin Cihangir, the director of Anadolu Agency’s News Academy.

“This training program was very important for us. We want to deliver journalism education to Rohingya Muslims. … Thanks to these trainings, their voice will attract a greater audience.”

YTB’s Asia-Pacific Coordinator Ebubekir Kadri Biskinler said they have been providing training for the Rohingya community since 2019 to highlight their cause and problems, as well as their arts and culture to the world more effectively.

Biskinler said the Next Generation Academy leadership program is also being organized for young people in the Asia-Pacific region.

“So far, 25 young people from the Rohingya diaspora have participated. Our presidency aims to improve the relations of the Rohingya community with other countries,” he said.

More than 700,000 Rohingya fled to neighboring Bangladesh in 2017 as the Myanmar military launched a crackdown that saw villages being burned down, extrajudicial killings, and rape.

Turkey has always supported the community, repeatedly drawing attention to their plight.

India reports more than 4,332 deaths from ‘black fungus’ to date