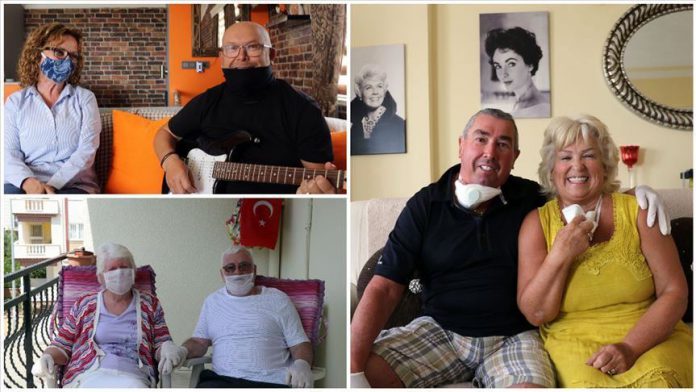 During the coronavirus lockdown period, Turkey does not only help its citizens but it also assists residing foreign nationals and tourists.

Due to the COVID-19 outbreak, many foreigners either could not go back to their countries or they did not want to return.

Hugh Mcgowan, 72, who settled in Didim 13 years ago, —a district of Aydin province, where more than 5,000 British people live thanks to its nature and history, on the Aegean coast of western Turkey— said he feels safe in Turkey.

He said despite they cannot leave the house due to restrictions, nothing is missing.

“Since we cannot go out, we can call the police and ask for help with our needs. In our country, the police never do such a thing. Europe does not have such a service concept like in Turkey,” he said.

He added that this understanding of the coronavirus process is wonderful.

Helene Mcgowan, the wife of Hugh, said the local authorities are closely interested in people.

“When we want to go to the hospital or bank, we call the 155 —one of the major emergency numbers in Turkey like 911. And the officers come and take care of us,” she said.

The Turkish government has restricted leaving home or walking in open areas such as parks and gardens for the people who are older than 65 and/or suffer from chronic illnesses.

– Turkey is safer and more comfortable

Brian Manson, another resident foreigner, said he has been living in Didim for 15 years and he feels safer and more comfortable than other people who live in European countries.

“Well-prepared precautions were taken against the outbreak in here. Turkey is really in better condition than many European countries. We feel safe here,” he said.

Stressing the solidarity in Turkey, he said the Turkish officials help both its citizens and foreigners living in the country without exception.

“There is no queue when we go to hospitals. The health system here is really good,” he added.

Janice Manson, the wife of Brian, she said they are very pleased to be in Turkey by drawing attention to the number of coronavirus cases and deaths in the UK.

She said the measures taken in Turkey are very well, and they can easily reach the authorities.

– Turkish government thinks of its people

Ron Shallish, 65, who has been living in Didim since 1995, stressed the neighborly relationships in Turkey.

“Our Turkish neighbors are always interested in us because of the restrictions. […] this situation impressed us very much,” he said.

Katy Shallish, the wife of Ron, said she talks to her relatives in the UK via mobile phone and she compares between the two countries.

“I feel safe in Turkey. […] Because the (Turkish) government thinks of its people and it does positive things. There is no one on the streets. But, the situation in the UK is not like this. Because they took precautions too late,” she said.

Mehmet Turkoz, the District Governor in Didim, said foreigners living in the district are also actively using public services during the outbreak.

Turkoz said they have increased the number of volunteers and staff who speak English in Turkey’s Vefa Social Support Group to provide better quality assistance to foreigners.

“We help foreigners living in our country with feelings of benevolence and hospitality,” he said.

The groups help foreigners from 13 different nationalities, such as Uzbekistan, Iran, Syria, Ukraine, and Russia, who live in the city.

Halit Mert, one of the volunteers in social support groups, said with the support of philanthropists, they try to reach everyone in need in Antalya without any exception.

“So far, I am pleased to bring help to 350 families in need. It makes us happy to see people happy,” he said.

Kyrgyz Gulcan Uspbaeva, who has been living for 6 years in Antalya with her family, said she is very pleased with this solidarity.

“I was a babysitter before the outbreak. I cannot go out and go to work because of the coronavirus. We try to survive in these difficult days with the help of the Turkish people. May Allah bless everyone who helps,” she said.

Meanwhile, so far, a total of 29,140 patients have been discharged from hospitals after recovering from the virus, with 3,558 discharged on Sunday alone, according to the country’s Health Ministry.

After originating in Wuhan, China last December, COVID-19, the disease caused by the coronavirus, has spread to at least 185 countries and regions across the world, with Europe and the US currently the worst hit.

The pandemic has killed over 207,500 people with total infections nearing 3 million, while more than 876,500 have recovered from the disease, according to figures compiled by US-based Johns Hopkins University.